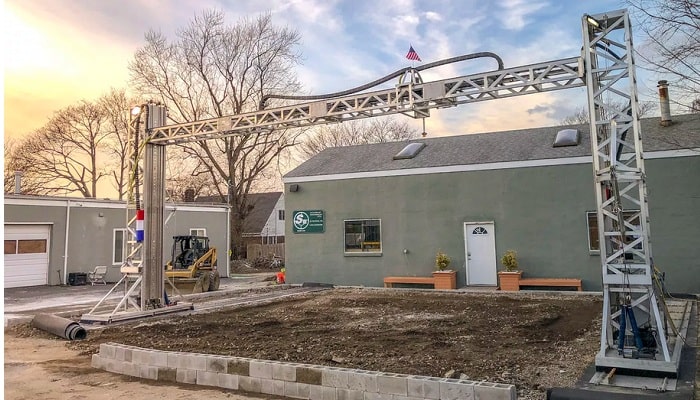 The building industry fantasized about a time when homes and buildings could be constructed on a shorter timeline, with less labor, with less resources, and at an affordable price. With several technological advancements in 3D-printed construction in the past couple of years, those far-fetched ideas may soon come to fruition.

Although the realization of 3D-printed homes may be in its early stages, construction technologies company ICON believes it could be a viable way to quickly build affordable housing. In March, the company delivered on that goal by completing a series of 400-square-foot, 3D-printed homes that will serve as new beginnings for six formerly homeless people.

Located in Austin, Texas, the project is part of a continued partnership with Mobile Loaves & Fishes, a local nonprofit known for its service to the area’s homeless community. The organization’s Community First! Village is a 51-acre master plan that provides affordable, permanent housing for men and women coming out of chronic homelessness.

“The promise of ICON’s 3D-printing technology is really exciting, and what better place to start putting it to use than in one of the country’s most innovative neighborhoods designed to serve men and women who have experienced the trauma of homelessness,” says Alan Graham, founder and CEO of Mobile Loaves & Fishes. “Vulnerable populations like the homeless are never among the first to access leading-edge anything, but now here in Austin, they’re among the first in line who will be living in some of the most unique homes ever built—and we think that’s a beautiful thing.”

The six 3D-printed homes are located in Phase II of the development. When completed and at full capacity, the master-planned community will house an estimated 480 formerly homeless individuals, which represents roughly 40% of Austin’s chronically homeless population, according to the nonprofit.

The Construction
In early 2019, Cielo Property Group partnered with ICON to commission one of the company’s 3D printers—the Vulcan. The local real estate developer dedicated the machine to the city of Austin to address local affordable housing issues and ultimately around the country, either by Cielo expanding its involvement or by serving as a model for how other developers can play a direct role in solving the pressing issues of affordable housing and homelessness. With the developer’s help and funding from Mobile Loaves & Fishes and its supporters, these 3D-printed homes were made possible.

For the construction of the homes, ICON uses robotics, automated material handling, advanced software, and a proprietary concrete, Lavacrete. The material is cementitious-based and has a PSI of up to 6,000, according to Dmitri Julius, vice president of operations at ICON.

Once the foundation has been poured and cured, the ICON team affixes two rails to the edge of the foundation. The Vulcan arrives and rolls off the truck and onto the slab. The team completes a few software checks, gets the material ready via the Magma material delivery system, and then begins to extrude layer by layer.

From the first layer to the final layer, it takes around 24 hours for a 400- to 500-square-foot home to be 3D printed spread across several days, says Julius. And once the wall system is 3D printed, traditional construction methods are used to complete the roofing, windows, and doors.

The Design
The homes’ designs were created by local architecture firm Logan Architecture and finished by Franklin Alan. Although the series features multiple designs that were printed simultaneously, each of the 400-square-foot homes include one bedroom, one bath, a full kitchen, a living room, and a large porch.

Another local real estate developer, DEN Property Group, sponsored the interior design completion of the homes, allowing ICON and Mobile Loaves & Fishes to provide furnishings, décor, and artwork to create a comforting place for these individuals to call home.