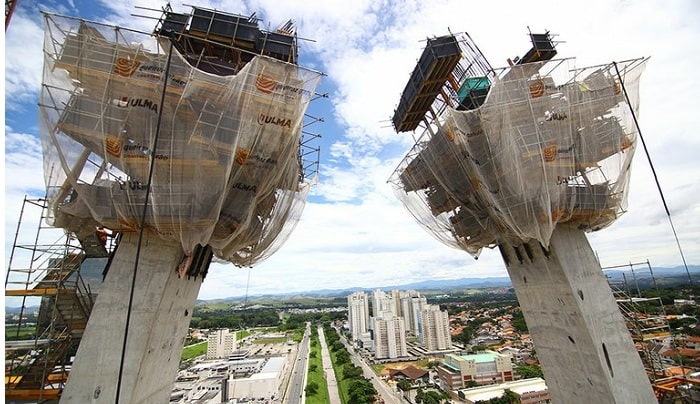 The arch of innovation is a cable-stayed bridge that will connect Zarur, São João, and Cassiano Ricardo avenues in São Paulo, Brazil. With a height of 100 m, it has become one of the most iconic bridges in the country of its type, given its peculiar arc shape.

This bridge will create a safer and faster route for more than 180,000 vehicles per day, which will ease the city’s traffic. It will also include a bicycle lane of more than 3.6 km.

One of the most relevant requirements in this project has been the versatility of the systems and the safety of the operators. To this end, the engineering team developed an integrated solution with the ideal formwork and scaffolding systems and applications for the pylons and the roads that run between them. The Queiroz Galvão construction company has once again trust in ULMA’s engineering solutions, as well as in the capacity to respond to a project with stringent execution deadlines.

The ATR self-climbing system was chosen for the two pylons with variable inclination and four-sided section, in combination with the VMK timber-beam formwork for the outside and the KSP Platform for the inside. The self-climbing system has been perfectly adapted to the inclination and elliptical curve of the shaft of up to 23º in the last concreting. The whole set has allowed high execution rates, 3-day concreting cycles in 3.6 m high sections, without the need for a crane. In addition, it has three levels of working platforms for carrying out work on the formwork, rebar or concrete, as well as for lifting the structure, thus maintaining strict safety levels at great heights at all times. Despite the complexity of the geometry, the MK system in its different applications has solved all the structural requirements.

The two carriageways rest on an X shape. They were built with ENKOFORM HMK, supported by T-60 shoring towers. A solution of MK gantry formwork was proposed for the rest of the board to avoid closing the tracks.

To access the different areas of the bridge, BRIO stairs were enabled on each side of the arch and in two separate sections. The first section is 60 m high and rests on the ground. The second section, 40 m high, consists of three independent staircases arranged on BMK consoles on the arch.