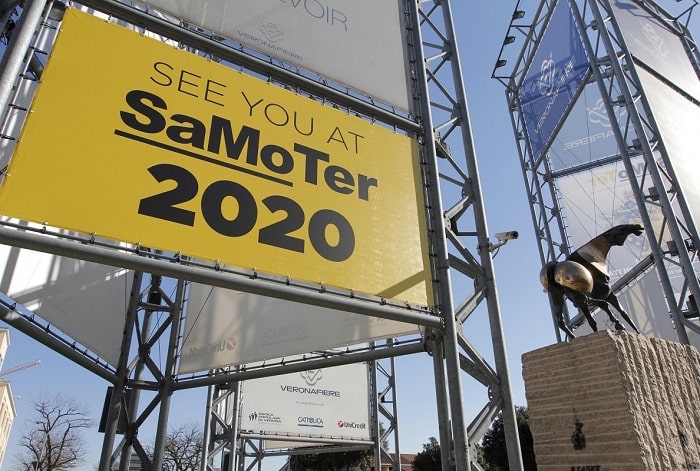 Sales of earth moving machinery in 2018 on a global scale accelerated sharply, achieving growth of 23%, thereby equalling the splendid performance already posted in 2017. In total, 825,000 machines were sold in 2017, while 2018 saw sales leap to more than one million units. A positive scenario that crowns a three-year period (2016-2018) that was even better (+8%) than the cyclic expansion phase that characterised the period 2003-2007.

Combination of several factors
The record result in 2018 was driven by a combination of several factors, starting from investments in construction on a global scale in excess of 7,150 billion euros (11.6% of planetary GDP). This is highlighted by data analysed by Prometeia for SaMoTer Outlook 2019, the sector observatory presented today at Veronafiere during the 5th edition of SaMoTer Day. The event is one of the stages in the run up to the 31st edition of SaMoTer, the international construction equipment trade fair scheduled at Veronafiere 21-25 March 2020 (www.samoter.it).

Favourable context
2018 for the most saw interesting conditions in this market, which have constantly improved the investment intensity index for earth moving machinery since 2016.

North America and China – Market leaders
In most parts of the world, the market posted two-figure growth, attaining new historical peaks in the United States (+36% on a trend basis), India (+48%), China (+35%) and the rest of the world (+20%).
North America and China were the driving forces behind almost two-thirds of overall growth, with a combined market share of 50%, followed by Western Europe (18% of market share) and India (7% of the world market).

Western Europe
The tailender of this positive trend is Western Europe, with a growth rate of just 3% and 182,000 machines sold. This slowdown was in any case expected and saw a reduction of more than three percentage points on the global market ranking compared to 2017.

The market leader for sales is Germany (23%), closely followed by the United Kingdom (22%).
Italy ranks fourth, with a market share of 9%.

On the other hand, taking a closer look at changes in trends, Spain performed well in 2018 (+48% compared to the previous year), as well as Italy (+16%) and the United Kingdom (+9%). More modest growth, however, saw seen for France (4%), Belgium (2%) and the Netherlands (1%). There was a somewhat surprising setback of -8% in Germany, partly because of a shift on the market towards larger machines. On closer analysis, Germany’s market share in Western European decreased by 3% compared to 2017.

Central and Eastern Europe: Russia leads the way
In Central & Eastern Europe, the market giants are Russia and Poland, respectively representing 42% and 18% of the global market share. These two countries were the driving force in 2018 for increased sales, with particularly significant growth rates: +59% for Poland and +32% for Russia.

The third player in this part of the world is Turkey (16% market share), having been overtaken by Poland in just two years, posting a downturn in 2018 of 32% on a trend basis.

Earthmoving machinery: good performance for all product types
As regards product dynamics, the earth moving machinery market in 2018 was characterised by sustained and widespread growth for all types of plant: track-laying excavators (+25%), mini-excavators (+15%), wheel loaders (+19%) and compact mini loaders (+41%).

Scenario for 2019-2021: international background and construction investments
Global investments in the global construction sector came to more than 7,000 billion euros, posting growth of 2.6% – a positive result but lower than the 3.3% figure achieved in 2017. The slowdown had a more intense impact on the residential sector.

India booming
India has established itself as the most dynamic market, with 8.3% growth for total construction investments and 7.4% for residential construction.

North America grew by 1.7% for total construction investments but fell back by 0.6% for residential construction. Latin American and Japanese markets were both negative.

The factors underlying the slowdown identified by Prometeia which, as mentioned, had a more significant impact in the residential segment, are essentially attributable to falling confidence on the part of households and businesses, the impact of financial crises in several emerging economies, constraints on the expansion of the offering (such as labour and building space) or, once again, by the termination of the residential building cycle in a number of advanced countries.

Labour shortages in France and Germany
The confidence climate in the German market remains at a high level, even though companies with obstacles to production growth have increased since the second half of 2017. In particular, in Germany and France the main constraint is a shortage of labour, while in Spain or the United Kingdom the main brake is demand.

Central and Eastern Europe: construction supported by EU funds
Sustained dynamics for investments in Central Eastern Europe, with the exception of the construction market in Turkey, going decidedly against the trend compared to 2017. Overall, however, the implementation of EU funds during the 2014-2020 programming cycle has supported construction, particularly civil engineering, in Central European countries in a context that is also favourable for residential construction.
Going into more detail, Hungary demonstrated the best climate of trust for construction companies; positive attitudes even in the Czech Republic.

USA: residential segment down
Across the ocean, investments in residential construction fell back in the USA, while the expenditure on civil engineering projects increased, with special reference – in the second half of 2018 – to the road network. High housing prices and rising mortgage rates have begun to affect residential demand for the US construction field.

Asia: China downsized
On the Asian market, India recovered rapidly after the shock early in 2017, with added value for construction reaching 11.5% in the first quarter of 2018. Growth in infrastructure spending in China was significantly reduced last year, down from +17.8% of nominal investments in infrastructure in 2017 to a much more timid +3.8%.

Macro-economic scenario
On an international scale, the macro-economic scenario indicates a slowdown stage for the global economy, with risk factors that can be identified in the volatility of financial markets, commercial tensions on a global scale, the uncertainties of Brexit, the Chinese Hard Landing and in certain aspects of political uncertainty of variable intensity in a number of geographical areas around the planet.

Prospects
The prospects for construction in the period 2019-2021 indicate still moderate growth in 2019, with a gradual recovery starting from 2020. In Western Europe, the trend towards slower rates of expansion should prevail, while favourable prospects are evident for countries in Central Europe. However, the Turkish market will still be experience difficulties in 2019, not the least because of o political tensions and uncertainties linked with investments.
Broadening the horizon on a global scale, India confirms its role as a driving force.

The construction market situation in Italy
In Italy, the recovery in construction showed signs of slowing down at the end of 2018. During the year, the main driving force for growth was residential construction, thanks also to a recovery in the new homes segment. On the contrary, the decline in civil engineering shows no signs of coming to an end.

Recovery for real estate
With reference to the real estate market, the positive trend in transactions continues, with sales positing an increase of 6.6% in 2018, thereby consolidating the expansionary trend seen since 2014. However, the fall in prices has not yet fully stabilised.
The recovery in construction investments may strengthen as of 2020-2021, driven by civil engineering, while so far in 2019 there are signs of a slowdown spread across all sectors, caused by the deterioration of the overall economic situation and the persistent weakness of public works.

2019: a year of adjustment
According to the Outlook presented by Prometeia, 2019 will be a year of adjustment for the global earthmoving machinery market. Against a global macroeconomic scenario that is slowing down and punctuated by numerous risks of reversal, confirmation of the expansion phase in the building cycle should see high levels of demand, albeit without the acceleration seen in 2018 – a particularly dynamic year. In the face of increasing uncertainty, the propensity to invest will, overall, record a moderate decline.

On a number of important markets, then, the high levels of sales achieved in recent years will be curtailed in the wake of high investments in machinery already implemented in recent years. The need to update and expand the machinery in use will continue, however, to sustain demand on the markets most severely affected by the recession, such as Spain, and those enjoying strong growth where the machinery pool is being developed, such as emerging countries (excluding China).

On mature markets, the Western European earth moving market in 2019 will tend towards a substantial adjustment on the levels of the previous year, the result of differentiated dynamics in individual markets. Consequently, a downturn is likely to be seen in Italy, France, the United Kingdom and Holland, offset by increases in Germany, Spain, Belgium, Portugal and some Scandinavian countries. In 2020 and 2021, thanks to improved background conditions, the expansion stage may once again take in all markets, resulting in average growth close to 4% for the Western Europe area in overall terms.

In North America, after the all-time high in 2018, demand for earth-moving machinery in the USA is expected to fall back, in a context of moderation in construction activity with a slowdown especially in the residential segment. From 2020 the US market will be able to resume a path of growth, returning to levels similar to those of 2018.

The scenario in Japan sees a positive return on investments in the construction field, albeit at moderate rates close to 1% per year. This trend will support an increase in demand for machinery and thereby partially offset the estimated gap in relation to the level of balance.

On mature markets, the construction industry in central and eastern Europe is expected to increase by around 50%, well above the threshold of 55,000 machines in 2021.

The main input for expansion will come from Russia, which will confirm its distinct leadership in the area. Poland will also grow steadily over the period, supported by lively dynamics in construction activity.

In Turkey, despite the economic difficulties, demand for earthmoving machinery sho8ld be able to resume moderate expansion as of 2019, albeit with downside risks. This is because the Turkish market has already reduced significantly over the previous two years.
After strong expansion in the three-year period 2016-2018, the Chinese market is expected to settle at around 2018 levels (about 240,000 machines) throughout the forecast period. The slowdown in the expansionary pace of the economy and a kind of harmonisation of those in the construction/building sector are the basis for the forecast that also assumes historically high levels of investment intensity will be maintained.

The strong growth expected for the Indian market, on the other hand, underlies convergence towards “Chinese” investment rates in a context of intense growth in construction investments. The positive forecasts made for Latin America and the rest of the world are also guided by the progress of the building cycle.

The Italian market: prospects for the three-year period 2019-2021
Indications for 2019 suggest a decline in demand for earth moving machinery in Italy. The setback for construction activity and, perhaps, the national economy as a whole, will depend on investment plans.

However, the need to update the machine pool as an element capable of sustaining demand throughout the forecast period will partly offset the negative trend. In fact, as of 2020, the market should be able to resume good growth, thanks also to the expected re-launching of public investments. However, the picture outlined is by no means exempt from risks of a downturn. Growth in 2020 is estimated at 9% and at 5% for 2021, thereby selling more than 17,000 machines.