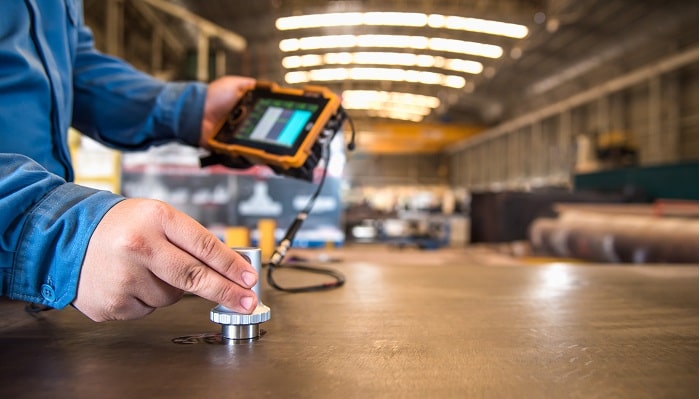 On the contrary, non-destructive testing analyzes the characteristics of various building components and detects discontinuities without damaging the material. It’s a non-intrusive approach to testing. It’s possible and considerably practical, provided that the inspector uses the appropriate NDT instruments and apparatus.

Visual inspection is the oldest and predominant method of building inspection. A trained naked eye has the power to detect surface defects, such as porosity, craters, cracks, slag inclusions, and more. Its effectiveness depends on how illuminated the surface is, how strong the inspector’s eyesight is, and how accessible the component under inspection is.

For this reason, inspectors can use additional aids, such as magnifying glasses, endoscopes, borescopes, inspection cameras, robots, drones, and flashlights.

Although visual inspection may seem basic, it’s still more beneficial than other technological approaches, given that a well-trained inspector can identify most signs of damage. Moreover, it’s very easy to carry out and cost-effective as it can be done without the use of any sophisticated equipment.

Radiography testing involves the use of gamma or X-rays to reveal flaws within a concrete structure. Usually, these rays are released from a radioactive isotope and directed toward the section under test. As the rays pass through the concrete section, its different elements, such as reinforcement steel bars, aggregates, and voids, absorb varying quantities of the rays.

The radiographic film on the other end of the concrete element captures the different quantities of the rays and draws an image. This can accurately show the location of voids, cracks, and other imperfections. However, the interpretation of concrete radiographs is somewhat subjective, given that there are no standardized acceptance criteria of how voids look on the radiograph. 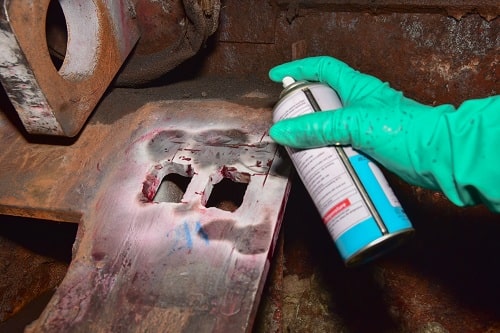 This NDT method is also known as liquid penetrant inspection. It’s used to uncover surface defects such as cracks, porosity, seams, laps, and more. The section under test must first be thoroughly cleaned. Then, the inspector applies a fluorescent dye by brushing or spraying, and leaves it to soak into the defects.

After a few minutes, the inspector pulls out the solution from the imperfections using a developer. Finally, they perform a visual inspection under white or ultraviolet light to reveal any flaw.

Another commonly used term for electromagnetic testing is eddy current testing (ECT). It makes use of electromagnetic induction to reveal both surface and subsurface flaws. The inspector excites a single element ECT probe with an alternating current (AC), producing a magnetic field.

When the probe is placed near a conductive building element, eddy currents are set up in the material. These currents usually follow circular paths. But, if there are flaws in the material, the flow patterns, intensity, and phase of the eddy currents change. Thus, the inspector can quickly identify those sections with defects.

This method is advantageous due to its portability in the sense that the testing probes can easily be carried anywhere. However, it’s only effective on conductive materials, meaning it can’t be used for concrete tests.

This is an effective NDT method of detecting damages in concrete structures. It’s done by releasing sound from a transducer into the test material, and receiving the sound waves on the opposite end using a receiver.

You understand that acoustic waves travel at different speeds across different materials, depending on the density. Generally, poor concrete causes the waves to travel slowly, while high-quality concrete leads to faster wave speeds.

For a given concrete structure, different transmission times at different sections may indicate the presence of defects. Also, the failure of the acoustic wave to reach the receiver may be due to a massive crack within the concrete element. Echoes bouncing back to the transducer may also be due to defects.

While the method is effective, it may be challenging to interpret the results on heavily reinforced concrete structures. The acoustic wave travel speed in steel is much higher than in concrete.

Non-destructive testing is a non-intrusive method of identifying defects in buildings during routine inspections. It’s usually harmless to the building occupants, and that’s part of the reason why inspectors prefer it to destructive testing. Furthermore, it saves time, energy, and money. If you’re interested in trying out these methods, get the right equipment and training, and you’ll be good to go.