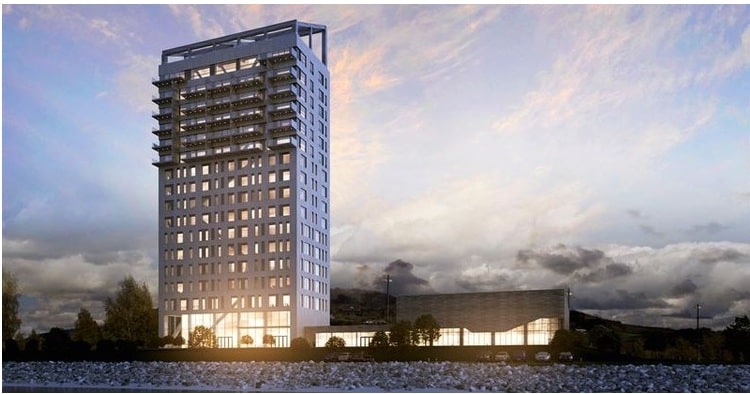 With an expected completion date of March 2019, the 18-story, 80-meter-tall-plus building in Brumunddal, Norway known as the Mjøsa Tower will soon become the world’s tallest wooden structure, a coveted title among those designers who favor wood over more traditional tall building materials. Designed by Voll Arkitekter, the Mjøsa Tower is on track to supersede the previous wooden record holder, the Brock Commons Student Housing building at the University of British Columbia, which topped out at a stately 53 meters in height.

Wood has numerous advantages over oft-used concrete and steel: for one, the construction time can be cut approximately in half due to easy prefabrication and the overall lighter weight of the materials. Surprisingly, one of wood’s advantages as a tall building material lies in its ability to withstand fires, at least when compared with the tendency of steel to melt down during an all-consuming blaze. As the site’s general contractor Erik Tveit, who is also the Project Manager at HENT AS explains, “Fire safety rules state that buildings must be able to withstand a full fire for at least two hours without collapsing. When you have a building made of steel and concrete, the steel melts and the building collapses.”

The tower’s attributes aren’t limited to its choice of building material. With a site that borders a river, Øystein Elgsaas from Voll Arkitekter explains that “The facades of Mjøstårnet will be dressed in wood panels in a stylized and repeating pattern inspired by the movement of the water and the way light dances on the ripples of its surface.”

However, it’s worth noting that this building is not made entirely of wood: in order to keep the tower from swaying in the wind, concrete will be added to the upper storeys to act as a stabilizer. The contractors are careful to note that, “Nevertheless, concrete will be used between the floors of the Tower’s top seven storeys. Using concrete has nothing to do with th

e load-bearing capacity. There’s a simpler explanation: the swaying that increases the higher you get in a building built of wood or concrete. The weight of the concrete in the upper storeys makes the swaying slower and not as readily perceivable.”