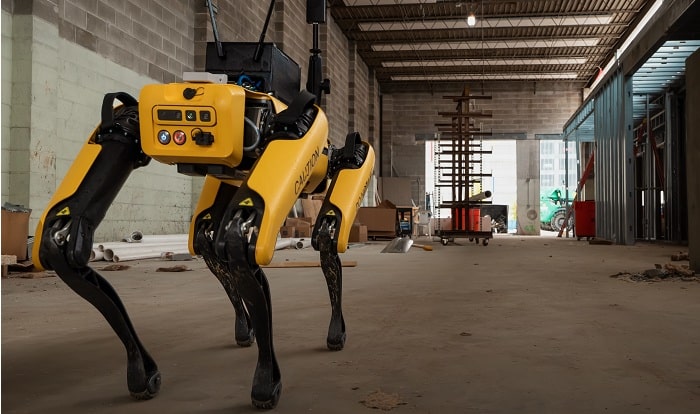 Today, leading enterprise drone data platform DroneDeploy has become the first single solution that can capture and process photos, videos and more from any angle – from the ground to the air, from exterior to interior, on foot or by machine. Through its new feature, 360 Walkthrough, DroneDeploy now works with both drones/aerial cameras and any on-the-ground 360-cameras (hand-held or robotic) to provide a valuable, comprehensive digital reconstruction of any job site.

The offering has already been tested and proven in collaboration with mobile robot creator Boston Dynamics, and one of the nation’s largest privately held construction companies, Brasfield & Gorrie. The new product and collaborators were unveiled on the first day of DroneDeploy’s annual DroneDeploy Conference, happening virtually October 13 and 14, 2020.

“DroneDeploy is already the leader in enabling businesses to capture the reality of their job sites from the air. But we know our more than 5,000 customers are also looking for a solution that allows data capture on the ground and indoors,” said Mike Winn, co-founder and CEO of DroneDeploy. “Today, we’re responding to that need with 360 Walkthrough. By combining aerial, interior and ground data onto one platform, we’re providing our customers with a complete perspective of their sites, ultimately increasing efficiency and worker safety in industries like construction, agriculture, renewables, and more.”

Brasfield & Gorrie has been using DroneDeploy since 2015. DroneDeploy has helped Brasfield & Gorrie reduce expensive progress documentation costs and capture significantly more imagery than previous methods. Earlier this year, the company began collaborating with Boston Dynamics and DroneDeploy to develop an industry-first workflow for automating 360 video-based construction documentation. Brasfield & Gorrie helped develop and pilot a workflow to perform on-the-ground building walkthroughs and inspections using the agile mobile robot ” Spot ” by Boston Dynamics, along with DroneDeploy’s 360 Walkthrough. Outfitted with a 360-camera, Spot allows workers to autonomously capture data from building interiors and take close-up photos for the bid process or inspection. Using the Spot and DroneDeploy SDKs, Brasfield & Gorrie specialists are able to automate the full process, from mobile data capture to cloud upload and image processing, immediately making the data available for other project team members to view using DroneDeploy. With this new workflow, superintendents and project managers can easily and efficiently gather the data they need to obtain a comprehensive view of their job site, from any perspective.

“By combining robotic automation with DroneDeploy’s interior and exterior progress documentation process, we’re able to more consistently capture data about the complete project,” said Russ Gibbs, Director of VDC, Innovation and Operational Technology at Brasfield & Gorrie. “As a result, we’re able to make more informed decisions while allowing our team members to focus on tasks that require their expertise.”

“One of Spot’s chief functions is to automate data capture on job sites safely, accurately and frequently, connecting customers to critical insights that keep projects on-track,” said Brian Ringley, Construction Technology Manager at Boston Dynamics. “By collaborating with DroneDeploy and Brasfield & Gorrie, we’re making it easier to implement repeatable,
autonomous 360 data capture in complex environments where Spot’s unique mobility is an advantage, and leverage the DroneDeploy platform to make that data actionable in a common data environment.”

360 Walkthrough is just one part of DroneDeploy’s ultimate vision of a platform that not only captures comprehensive data, but also takes action. As many industries become more reliant on automation, DroneDeploy will become a critical component to making a robotic autonomous loop possible.