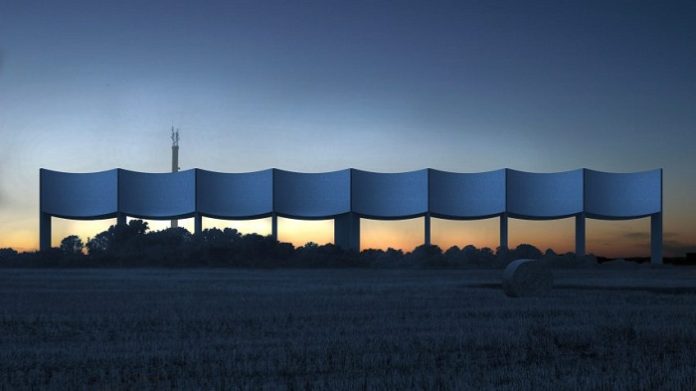 Undulating concrete panels will form the facade of VÅGA, a large water tower planned for a hilltop in Varberg, Sweden, to create the impression of a wave rolling across the landscape.

White Arkitekter seeks to challenge the idea that water towers must be vertical and circular with the design. The Scandinavian firm instead proposes a horizontal structure, which it suggests is better suited to its function. VAGA water tower by White Arkitekter, in Varberg, Sweden

Planned for the east of the city, VAGA will comprise two tanks for storing water. Each one will be faced by four concave panels that change in appearance throughout the day, as shadows move across them.

To further emphasise this form, the cisterns will be long and narrow, and placed horizontally beside each other, creating an elongated structure that “can be perceived as either very thin or extremely long as you move around it”. VAGA water tower by White Arkitekter, Varberg, Sweden.

“This giant landmark has been designed to have a shifting appearance” lead architect Mattias Lind told Dezeen. “As the sun moves around the tower during the day, the horizontal curvature creates an ever-changing expression of light and shadow.”

“This shape illustrates fluidity, synonymous with the tower’s task of storing water, and is instantly recognisable from great distances across the region’s flat landscape.”
VÅGA water tower by White Arkitekter, Varberg, Sweden

VAGA was the winning entry in a competition organised by local water management company Vivab.

The brief called for a water tower that would provide a unique landmark for Varberg. The structure needed to be able to simultaneously store 10,000 cubic metres of water and at sufficient pressure, to support the recent expansion of Varberg.

This also positions it at a suitable height to attain the hydrostatic pressure needed for distribution of water to the city.

“The tower is located on a hill where sufficient pressure in the water system could be achieved. There, the water tower will also be clearly visible both from the city center and from European route E6 which connects Copenhagen, Gothenburg and Oslo” Mattias added.

“People travelling this route in the future will know the Varberg water tower as one of the most recognisable landmarks along the way.” VAGA water tower by White Arkitekter, Varberg, Sweden

The structure will be built from concrete, with a light, natural finish that is free of pigmentation. This will prevent contamination of the water, which will be in direct contact with the material.

Construction is scheduled to start in 2020, and is expected to take two years.

Other new water tower designs include a project by Belgian architecture studio V+, for a mesh-covered structure supported on angular legs, and a funnel-shaped tower in Chile designed by architect Mathias Klotz.