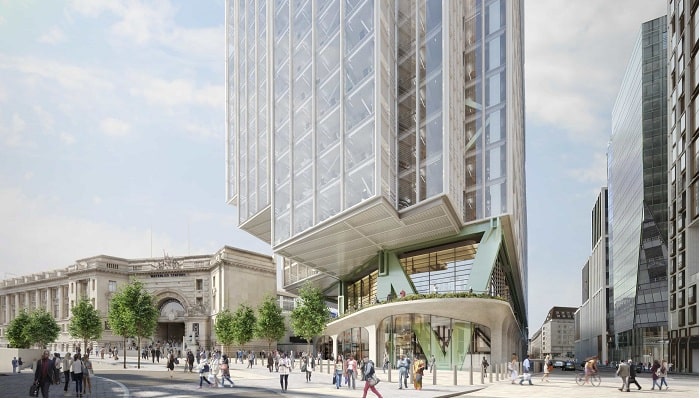 HB Reavis has secured approval from Lambeth Council’s planning applications committee for the redevelopment of Elizabeth House site in Waterloo.

Designed by Allford Hall Monaghan Morris (AHMM), Elizabeth House site plans will create around 1.2m ft² of workspace supporting up to 11,000 jobs and will also create a new retail and transformed public realm next to Waterloo Station.

The project will take up one acre of space and will include publicly accessible garden promenade directly connected to the Waterloo Station concourse level.

Connection to the station will benefit up to 100 million annual station users. A new pedestrianised street, the ‘Curve’, is also expected to be a major new pedestrian street for the area and be lined with shops and cafés.

HB Reavis stated that it plans to revitalise the unused space between Elizabeth House and the former Waterloo International Terminal to create a new pedestrian street linking Victory Arch Square and Leake Street.

Such transforming public realm improvements are expected to provide new access routes into Waterloo Station while helping to accommodate the 30% passenger growth predicted over the next five years.

HB Reavis submitted plans to Lambeth Council for the redevelopment of Elizabeth House in May 2019. The company acquired the building in May 2017 and claims to have met local stakeholders and community groups during the consultation programme.

Elizabeth House is a 1960s office building that was earmarked for redevelopment for more than 10 years. It has planning permission for two new buildings and public realm and the plans are expected to spark wider regeneration in the area.