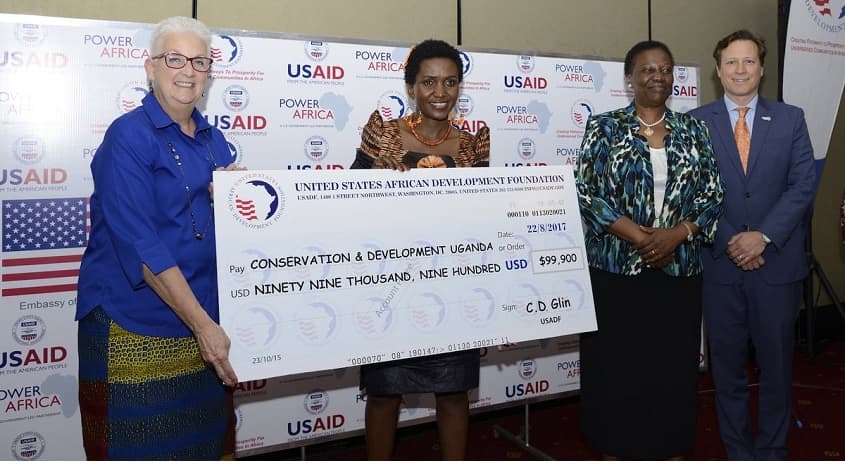 The U.S. African Development Foundation in collaboration with partners Power Africa and GE is proud to announce the winners of the 2017 Women in Energy Challenge in Uganda, where only 20% of the population is connected to electricity.

Joint Energy and Environments Projects (JEEP) and Conservation and Development Uganda Limited (CODE) will each be awarded a grant of $100,000 to expand their renewable energy enterprises to reach women beneficiaries. Dr. Maria Bawabya Senkezi, JEEP’s Chairwoman, says investing in women entrepreneurs is critical because “women invest money back into the community.”

The Women in Energy Challenge, part of the Off-Grid Energy Challenge, was launched in 2016 by USADF and GE to identify and accelerate enterprises either led by women or benefitting women, and help African entrepreneurs compete in the global economy. The Off-Grid Energy Challenge is a part of Power Africa’s Beyond the Grid initiative, which aims to drive private investment in off-grid and small-scale renewable energy solutions. By funding energy entrepreneurs, USADF is bridging the energy gap for some of Uganda’s most vulnerable populations.

Joint Energy and Environments Projects (JEEP) is a 100% women-owned enterprise in central Uganda. With a $100,000 grant, it will install 6 green power units in Kalangala district, a remote island district in Lake Victoria. Fishing is the main industry in this island district in Lake Victoria, but commercial ice to preserve fish is both expensive and limited. As a result, a significant amount of fish is lost before it can be sold in the market. The 6 green power units which JEEP establishes will each have solar-powered cold storage facilities for preservation, phone charging and solar home systems for sale, and each will be run by a women’s group trained in bookkeeping. The green power units will each repay a portion of their profits to JEEP to be used to replicate the model throughout the region. This will not only provide local jobs, but will increase incomes for local women.

Conservation and Development Uganda Limited (CODE) is a majority-women owned enterprise in western Uganda where surrounding national parks limit the amount of available firewood, and as a result, women bear the brunt of energy poverty, walking long distances in search of firewood and cooking fuel. Through the grant, CODE will sell an initial 350 Agro-Eco kits using a flexible repayment financing model, which will provide alternative and safer fuel sources. Using a low-cost distribution system using Village Savings and Loan Associations, CODE will collect revenues and expand their business to impact more and more households in the region.

The U.S. African Development Foundation is the only U.S. agency dedicated entirely to Africa, and solely funding 100% African-owned businesses and African entrepreneurs. USADF aims to promote innovative solutions that increase access to reliable, affordable and sustainable power – particularly for vulnerable populations who will have little to no access to grid power.

“We launched this Women in Energy Challenge to find the best and the brightest female entrepreneurs that are making a difference in bringing electricity to rural communities. We are very pleased to see that these women-led enterprises are showing promise in finding alternative solutions to Uganda’s energy crisis,” says C.D. Glin, USADF President and CEO.

“Providing energy access to Africa’s population is a priority for us,” said Jay Ireland, President & CEO of GE Africa. “The Women in Energy Challenge is one of our commitments towards supporting local entrepreneurs and we are delighted that African women-owned enterprises are solving local challenges.”

In Uganda, where USADF has a $5 million co-funding agreement with the Government of Uganda, USADF has awarded three Off-Grid Challenge grants to energy enterprises. Since 2013, USADF has partnered with GE and Power Africa to fund over 70 off-grid energy companies in nine countries in Africa, and invested over $7 million in Africa’s energy entrepreneurs, which has already resulted in over 20,000 actual connections benefitting over 100,000 people. To learn more about the USADF Off-Grid Energy Challenge.

About USADF:
The U.S. African Development Foundation (USADF) is an independent U.S. Government agency established by Congress to support and invest in African owned and led enterprises which improve lives and livelihoods in poor and vulnerable communities in Africa. For more information, go to USADF.gov.

About Power Africa:
Power Africa is a U.S. Government-led initiative launched in 2013. Power Africa’s goals are to increase electricity access in sub-Saharan Africa by adding more than 30,000 megawatts of electricity generation capacity and 60 million new home and business connections. Power Africa works with African governments and private sector partners to remove barriers that impede energy development in sub-Saharan Africa and to unlock the substantial natural gas, wind, solar, hydropower, biomass, and geothermal resources on the continent. To date, Power Africa and its partners have helped 80 power projects comprising over 7,200 megawatts (MW) reach financial close with a total value of $14 billion. Three-quarters of those projects by MW are gas. Three-quarters of the 80 projects are renewables. Over 2,000 MW are already operational. Power Africa has helped add 10.6 million connections to off-grid, micro-grid and central grid solutions, which has enabled tens of millions of people gain access to electricity for the very first time.

About GE :
GE (NYSE: GE) (GE.com) is the world’s Digital Industrial Company, transforming industry with software-defined machines and solutions that are connected, responsive and predictive. GE is organized around a global exchange of knowledge, the “GE Store,” through which each business shares and accesses the same technology, markets, structure and intellect. Each invention further fuels innovation and application across our industrial sectors. With people, services, technology and scale, GE delivers better outcomes for customers by speaking the language of industry.