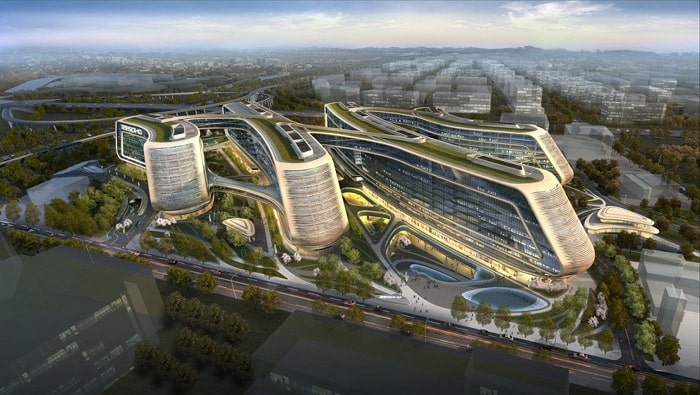 Zaha Hadid Architects (ZHA) has won an international design competition for the Shanghai base for the China Energy Conservation and Environmental Protection Group (CECEP).

The mixed-use project is made up of three towers containing offices, retail and leisure facilities will be sites in a park next to the Yangpu Bridge on the Huangpu River.

In keeping with CECEP’s concerns for sustainability, ZHA hopes to make the 218,000 sq m building the greenest in Shanghai. If it is successful, the building will have a score of around 90 credits in China’s Three Star system for rating building sustainability, which may be the highest score in Shanghai.

The development includes green systems such as:

Solar panels in the façade and roof, connected to battery storage and a microgrid, that aim to reduce energy consumption by 25% Thermal ice storage for cooling during the day, with ice generated at night using off-peak electricity Rainwater harvesting to irrigate green spaces A building management system that will monitor the interior environment and react to changes in temperature, air quality, daylight and the number of occupants.

Danish firm Ramboll will act as civil, structural and MEP engineer, and the China Academy of Building Research will be the associate architect. State-owned CECEP, which has its headquarters in Beijing, is China’s largest backer of renewable energy projects.