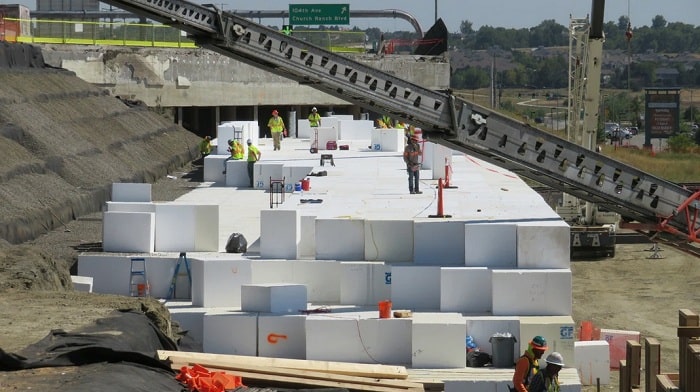 Crushed rock, soil, sand, and other earthen fills have largely dominated the construction industry for ages. The familiar, ubiquitous, and inexpensive nature of these materials has made them the preferred option for the construction industry over the years. However, since their characteristics can vary depending on their excavation source, and can thus change according to factors like weather, these conventional fills are significantly unpredictable, which has led the industry to seek more stable and sustainable alternatives.

In recent years, the “less is more” concept has permeated nearly every aspect of the modern world, including construction engineering. To that end, geosynthetic materials are emerging as the new, lightweight alternatives to traditional fill materials, thereby providing a solution to myriad construction challenges.

Geofoam being used with concrete.Geofoam International LLCGeofoam is proving to be especially useful in this regard, as the material is considered to be a perfect fit for solving construction issues through unprecedented flexibility and strength. Given the rapid rise in popularity for the material, as well as its strong potential in applications ranging from slope stabilization to soil remediation, to retaining structures, to lateral road reduction, and more, it is evident why the global geofoam market demand is poised to surpass over $1 billion by 2026, as per reports from research firm Global Market Insights, Inc.

First brought to market in the 1950s, geofoam has been a part of thousands of construction projects worldwide over the years. Geofoam is a type of multi-functional material, used as a go-to for construction activities, such as the building of structures, buildings, and foundations. The unique physical properties, value, and flexibility of this polystyrene foam have made it a popular material used for various construction applications, including thermal insulation & landscaping, roadways, stadiums, and others.

Geofoam is considered to be nearly 100x lighter than most soil materials and is almost 20-30x lighter than conventional lightweight fill materials. This substantial difference is unit weight as compared to its other counterparts makes geofoam an attractive option for fill material. Its role as a soil alternative also enables embankments made from geofoam to appear as normal sloped embankments or to be finished to look will walls.

Based on type, the geofoam industry is bifurcated into two main types, EPS (expanded polystyrene) geofoams, and XPS (extruded polystyrene) geofoams. While both these types are made from recyclable materials and are thus used extensively in construction operations, EPS geofoams possess a distinct edge over XPS foams and are a more widely used geosynthetic material. EPS geofoams have multi-functional properties that help replace the need for multiple products to achieve the desired outcomes, making these materials highly cost-effective. Furthermore, these geofoams work well as complementary resources with new synergies and EPS-foam based composites, in turn allowing end-users more flexibility and options for unique designs.

EPS geofoam helps mitigate and absorb the impact from gravity, earthquakes, and other naturally occurring forces, rather than simply stiffening or strengthening the structures against them, giving engineers the power to design more flexible and targeted solutions to various construction challenges.

Extruded polystyrene foams are also more popular due to their higher composition of recycled materials. Additionally, because these foams can be shaped into sheets and blocks, they are considered to be less harmful to environmental health.

Infrastructural health is rapidly coming to be a major concern for authorities worldwide. The increasing age of existing infrastructures, rapid rise in environmental shocks, and other such critical factors are quickly rendering conventional metrics and plans insufficient.

These burgeoning infrastructural challenges have triggered a growing consensus among major financiers, political authorities, and the general public across the globe, that higher investment in infrastructure maintenance is a favorable endeavor. To that end, economists are placing specific emphasis on the potential economic returns from spending related to maintenance activities. The refurbishment and maintenance of road and railway networks especially are gaining great prominence in recent years.

EPS geofoam has been used as a highway construction material for several years, but its true potential is only just being unearthed, as more owners, engineers and practitioners become more attuned to the benefits of this product in roadway & railway applications. Studies suggest that the geofoam industry from the roadways & railways end-use segment accounted for over 60% market share in the year 2018.

Geofoam has established itself as a cost-effective engineering alternative for complex applications such as foundation settlement and embankment stability. A notable example of this is the Interstate 15 project in Salt Lake City, Utah, which earned the ASCE (American Society of Civil Engineers)’s Outstanding Civil Engineering Achievement award in 2002, owing to the innovative use of geosynthetic materials such as EPS geofoam in the embankments, which facilitated the completion of the project in just 4 years, which is half the time taken by conventional approaches, at nearly $32 million under budget.