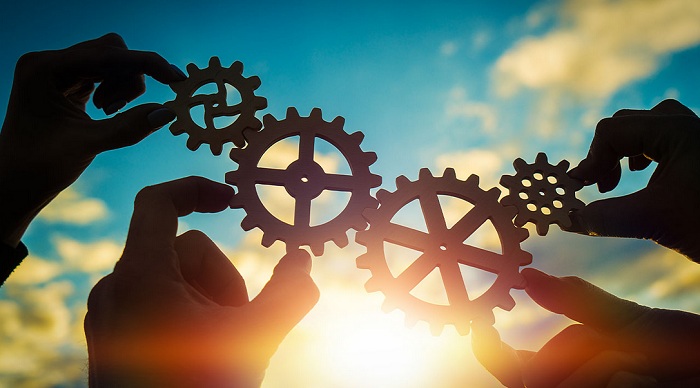 St. Louis’s Gateway Arch stands astride a riverfront park, built to serve as a symbol of the city as the gateway to the American west. But the arch serves as a symbol in a different, more abstract way, thanks to the way it was constructed.

In 1963 the two halves of the arch began their existence as separate structures embedded in concrete foundations 630 feet apart. Each leg grew in parallel as one slightly curved segment after another was added atop the last. And as both halves grew toward the sky they gradually arced toward one another as well.

Two and a half years after construction began, the final segment was ready to be installed, filling the now only 8-foot gap between the two legs. The crews were about to discover just how well everyone involved had done their jobs, and the answer was “very well”: the two legs were out of alignment by only 3/8 of an inch, requiring only a trivial correction as the merger of the two halves created the final arch.

The building of the Gateway Arch may not have been the greatest feat of engineering in American history, but there could not be a more apt symbol of the power of collaboration in construction.

Communication is critically important on any project that brings two or more people together, not least a construction project. Clear communication provides a multitude of benefits, but today none may be more important than the way it facilitates collaboration and coordination.

The most important of the soft skills

For at least two decades, soft skills have been growing in stature in the eyes of employers, academics, and government. And no soft skill earns more accolades than collaboration. “Coordinating and collaboration with others” was rated as the most important soft skill in a Bloomberg Next survey, cited by 51% of corporate respondents and 62% of academics. It’s not uncommon for writers and academics to assert the critical need for business cultures to become more collaborative.

More than a few people in the construction industry probably had the reaction “I could have told you that.” No industry has been more cognizant of the benefits of collaboration – long before it was fashionable. Of course, this doesn’t mean the industry has always mastered the art – but it has long been seeking continuous improvement on this front.

After all, poor communication is the root cause of half of all construction project reworks, according to a recent survey. On average almost five hours a week are spent on conflict resolution. In 2018 costs related to these shortfalls in communication and collaboration exceeded $2 billion for the average mid-sized construction firm.

But despite these issues – or perhaps because of them – getting better at communication and collaboration is something the industry is investing a lot of effort in. Some barriers to communication may remain entrenched, but others have been falling rapidly, thanks to advances in technology.

One great example is BIM software. By enabling the creation of a digital representation of a building, BIM has enhanced many different aspects of the design, planning, and building process. Yet if you Google “benefits of BIM” you’ll get page after page that either ranks collaboration as the most important of these benefits or at least includes it very high on the list. The software gives all stakeholders to the same digital environment. And while the industry has been slow to adopt 4D BIM, its incorporation of time-related information will facilitate even stronger collaboration.

With all of the discussion around advanced technology, however, it can be easy to see these innovations as a replacement for more basic approaches, rather as than a complement to them. BIM and other software must build on the most fundamental communication tool of all: a simple conversation, person-to-person, voice-to-voice.

Of course, this can be a challenge on a construction site. Noise levels are extremely high, well above the decibel levels capable of drowning out the human voice. The would-be participants in a conversation may be separated by hundreds of feet, whether horizontally or vertically. And any kind of hearing protection worn on the site will likely further limit one’s ability to hear.

The answer is a bit of technology that’s been around longer than BIM software, but endures nonetheless: high-noise headsets – a Noise Reduction Rated two-way radio with a noise-cancelling microphone. The headphones are lightweight and unobtrusive, and they secure comfortably behind or over the head. When everyone on a construction site is equipped with such a system, barriers of noise and distance melt away; the message that originates on one person’s lips is heard directly in the ears of its intended audience. Communication, coordination, and collaboration all happen in real-time.

A lot of vital soft skills aren’t easy to teach, and aren’t easy to facilitate. Collaboration still faces hurdles, but simply being able to hear shouldn’t be one of them.

Rick is North America’s foremost expert in improving manufacturing group communication, education, training and group hospitality processes. He has over 40 years of group hospitality experience, most recently serving as President of Plant-Tours.com for the last 18 years.  He has provided consulting services with the majority of Fortune 500 industrial corporations improving group communication dynamics of all types in manufacturing environments.