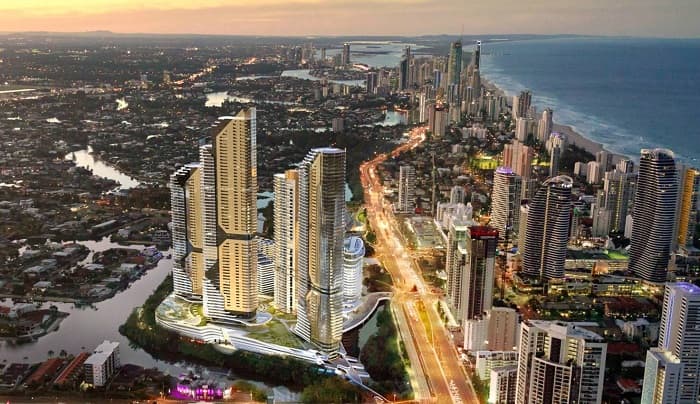 Australian gaming and show business group Star Entertainment will again seek permission for its US$720m project to build two towers at a waterfront site it owns in the Sydney suburb of Pyrmont, The Urban Developer reports.

The company previously made an unsuccessful application to build a 66-storey, 237m tower at that location, despite the fact that the area was zoned for a maximum height of 28m.

The new concept is for a 180m and a 110m tower, both with hotels and restaurants. Gladys Berejiklian, the premier of New South Wales, directed the Independent Planning Commission to review Pyrmont’s planning rules with a view to making them “consistent with the government’s vision for its future”.

However, the commission rejected the project on the grounds that it failed to meet the “standards of good design” and was excessive in height, bulk and scale.

At 110 meters, the hotel-only development would be less than half the height of the original Ritz-Carlton Hotel proposal, matching the height of the four 106m chimney stacks that rose from the former Pyrmont Power Station on the site.

As well as the Sydney project, Star is pressing on with the development of a resort on Queensland’s Gold Coast. The Star Gold Coast masterplan offers some 3,000 hotel rooms and apartments, and would, according to Star, attract about US$1.5bn in additional investment.

Matt Bekier, chief executive of Star Entertainment Group, said: “This would be a project of incredible scale, delivering substantial economic benefit to the state from jobs and increased tourism visitation.”

The development is taking place at the site at Broadbeach, about 40km south of Brisbane. So far, one hotel has been completed and the 596-room Star Grand has been refurbished. Eleven food and beverage outlets have been added and work is under way on the Dorsett hotel and apartments tower, due for completion in 2022.

Star is carrying out the scheme in a joint venture with Hong Kong-based developers Chow Tai Fook and Far East Consortium. In the coming years, four more towers are planned as well as “lush new resort facilities”.

Star is pressing on with its plans despite a loss of US$70m in the first half of the year. The company was forced to shut down its gaming floors in March, after the coronavirus pandemic took hold of Australia.