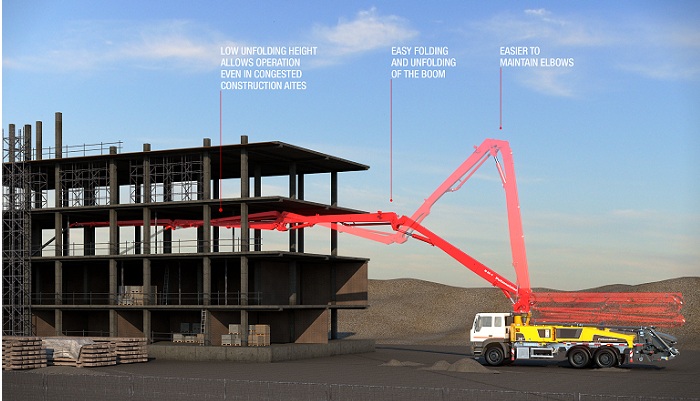 Headquartered in Germany, Putzmeister set up operations in India as early as 1997 and commenced production from its plant in Goa in 2007. Since its inception, the company has established itself as a leader in concrete pumps. Superior performance, reliability, long service life and lower long-term cost of ownership are the hallmarks of Putzmeister Truck Mounted Boom Pumps. Unbeatable maneuverability, flexibility and optimum use of reach have helped catapult these pumps to a leadership position in India.

Putzmeister Truck Mounted Boom Pumps have worked on major metro, bridge, refinery and thermal power plant projects in India. Globally these pumps are renowned for their ability to work across a range of application conditions and extremely harsh environments, including radioactive environments. In 1986, Putzmeister Truck Mounted Boom Pumps were put into action to help seal the Chernobyl Nuclear Reactor in a concrete sarcophagus. The machines pumped 400,000 cubic meters of concrete to seal the reactor. In 2011, Putzmeister Boom Pumps were adapted to pump water (160,000 litres per hour at a pressure of 85 bar) instead of concrete to help cool down the Fukushima Nuclear Reactor.

The company is currently in the process of rolling out Putzmeister Machine Cockpit on its fleet of Boom Pumps in India. This will allow fleet owners to optimize their machine uptime and fuel consumption. Remote fault monitoring will enable quicker fixes. Automated maintenance alerts will improve equipment management. And ofcourse fleet owners will know where their machine is at all times – ensuring no unauthorised movement or use.