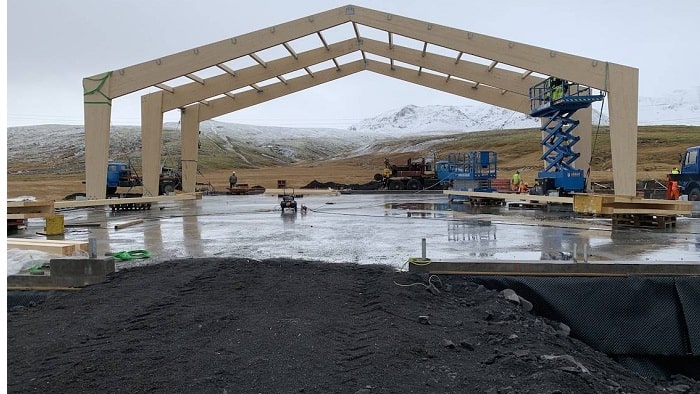 A trio of companies has begun building the world’s first large-scale CO2 capture and storage plant in Iceland, which they say will remove 4,000 tons of CO2 from the atmosphere a year.

The plant, called “Orca”, uses fans to suck in air and filter out some 90% of its CO2, which is turned into carbonate minerals for storage underground.

Developing the plant are company Climeworks, which makes the CO2 collectors; Carbfix, which owns the CO2 mineralising technology; and Iceland’s ON Power, which will power the plant with geothermal energy.

Construction began last month, and they say the plant will be running in the spring of 2021.

Christoph Gebald, co-CEO and co-founder of Climeworks, said: “Breaking ground on the construction of Orca marks an exciting milestone for Climeworks and an important step in the fight against climate change. Climeworks’ new plant Orca demonstrates that scalable, pure carbon dioxide removal via direct air capture is possible. And we are excited to be a vital part in kickstarting the carbon dioxide removal industry.”

Climeworks seeks income through a subscription scheme in which individuals pay a monthly amount. Plans start at £6, allowing a subscriber to claim to have removed 85kg of CO2 from the atmosphere a year, and rise to £44 a month, which pays for the removal of 600kg of CO2 a year.

The company says it currently has around 3,000 subscribers from 54 countries.