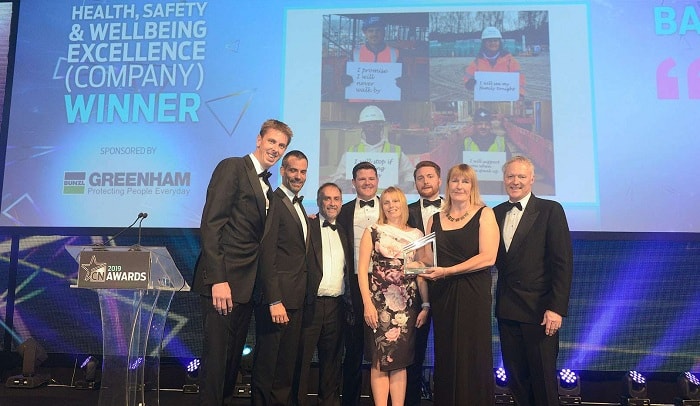 Balfour Beatty secured two prestigious awards at the 2019 Construction News awards last week, recognising the company’s excellence in Health, Safety and Wellbeing at both a company and project level.

Judges praised Balfour Beatty in both awards for “setting the benchmark and leading in the industry” in their categories and “were impressed by the sharing of knowledge, and the integration of health and safety into design”.

Balfour Beatty was presented the Health, Safety and Wellbeing Excellence (company) award for a number of leading initiatives including its commitment to eliminating new cases of Hand Arm Vibration Syndrome (HAVS) and the company’s ‘Zero Harm’ approach to ensuring its workforce, business partners, suppliers, subcontractors, members of the public and the environment remain safe from harm.

The company also secured the Health, Safety and Wellbeing Excellence (project) award for its work on the M6 junction 2 to 4 smart motorway project in joint venture with VINCI, for the integration of health and safety into the delivery of everyday tasks.

In addition, Balfour Beatty’s SMB[1] joint venture was highly commended for its efforts to implement sustainable initiatives on its Waterworks Bridge project in London. The scheme recycled the equivalent of 1.1 million plastic bags into a special plastic tarmac, ensuring the waste did not end up in landfill.

Heather Bryant, Balfour Beatty’s Health, Safety, Environment & Sustainability Director, said, “I am delighted that Balfour Beatty has been recognised for best practice and having a proactive approach to health, safety and wellbeing.

“It is only through setting the industry standard, that we will safely deliver our projects. Our close partnership with our supply chain combined with our collaborative approach to sharing our health and safety culture – including initiatives such as Zero Harm and Mates in Mind –ensures that we can eliminate risk from our industry”.

Balfour Beatty believes that long-term success is dependent upon the ability to keep its workforce and stakeholders safe by implementing a culture of health, safety and wellbeing in all aspects of its business. The company is committed to its Zero Harm goal and eliminating risk across the company. SMB Joint Venture comprised of Balfour Beatty, Skanska and MWH Treatment