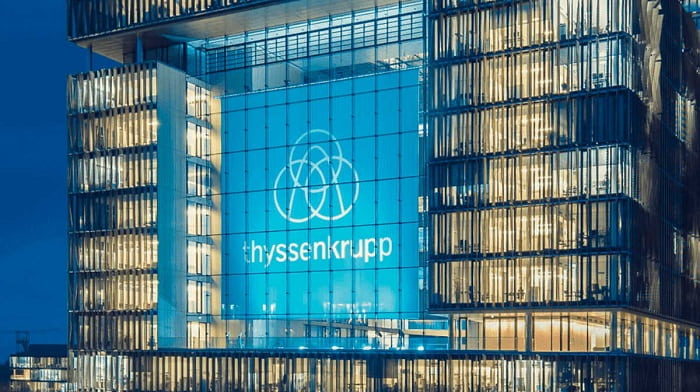 Slip-form construction of thyssenkrupp Elevator’s Innovation and Qualification Center (IQC) and elevator test tower has been completed. The IQC is part of thyssenkrupp Elevator’s new North American headquarters at The Battery Atlanta and, at 420 feet tall, will be the tallest building in Cobb County as well as the tallest elevator test tower in the Western Hemisphere.

The IQC and adjacent Corporate Headquarters (CHQ) are on schedule for completion in 2021 with final move-in by early 2022. Both the IQC and CHQ are being built on property owned by the Braves Development Company. Employees moved into the Business Headquarters (BHQ) location in nearby Pennant Park in March 2019.

“The completion of the IQC slip-form process is an important moment in our company’s history as it not only symbolizes a brighter future for our organization and the local community, but will be a beacon of engineering excellence that will help transform an industry in need of modern innovations,” said Kevin Lavallee, CEO of thyssenkrupp Elevator North America.

Slip-form construction involves a moving formwork system being set down on the foundation with concrete being placed on a continuous basis. Often referred to as the core or skeleton of a building, the slip-form construction process is relatively rare in the U.S. but is popular in Europe – this process was used for thyssenkrupp’s 800-foot-tall elevator test tower in Rottweil, Germany.

Brasfield & Gorrie has an extensive local footprint, having also constructed the Omni Hotel at The Battery Atlanta as well as One Ballpark Center, a nine-story, 250,000-square-foot office building that serves as Comcast’s Central Division headquarters. The general contractor also served as the managing partner of American Builders 2017, the joint venture that built SunTrust Park. Brasfield & Gorrie has completed more than $760 million worth of construction within a half-mile radius of the project’s site, and since 2009, Brasfield & Gorrie has successfully completed 182 contract projects with thyssenkrupp.

“Self-performing concrete work is one of Brasfield & Gorrie’s areas of expertise, and it gives us superior control over the cost, quality, and schedule of a project. We constantly seek opportunities to innovate so we can better serve our clients, and the slip-form process has allowed us to maximize efficiency while building this quality concrete structure,” said Brasfield & Gorrie Vice President and Division Manager Ben Norton.

Gleitbau – Salzburg has established a presence in market segments which had previously not utilized the slip-form technique, including towers and high-rise buildings, thanks in part to its technology and knowledge gained from working under extreme conditions in the construction of oil and gas platforms.

In July 2018, thyssenkrupp Elevator announced it would be moving its North American headquarters to The Battery Atlanta. Nine months later, thyssenkrupp Elevator, Brasfield & Gorrie and Gensler celebrated breaking ground on the IQC in a ceremony attended by Atlanta Braves executives as well as prominent members of the local business community.

With 18 shafts, the elevator test tower will be used to trial new concepts and product pilots, including high-speed elevators and TWIN, thyssenkrupp’s unique elevator system that features two cabins working independently in one shaft. The IQC will also test MULTI, the revolutionary rope-less and sideways-moving elevator system. In addition, the test tower will also conduct robust tests to ensure compliance with stringent safety requirements on standard elevators.

To showcase the elevators at the test tower, the IQC will feature a complete glass exterior façade facing The Battery Atlanta, allowing millions of visitors annually to view operations that are normally hidden behind concrete walls in rural locations. In addition to the elevator test tower, the IQC will also feature event and meeting spaces located at the top of the building – providing breathtaking views of the region – as well as a digital showroom, software lab, engineering offices and training facilities.

thyssenkrupp Elevator
thyssenkrupp Elevator brings together the Group’s global activities in passenger transportation systems. With sales of €8.0 billion in fiscal 2018/2019 and customers in over 100 countries, thyssenkrupp Elevator built its position as one of the world’s leading elevator companies from scratch in a mere 40 years’ time applying thyssenkrupp unique engineering capabilities. With more than 50,000 highly skilled employees, the company offers smart and innovative products and services designed to meet customers’ individual requirements. The portfolio includes passenger and freight elevators, escalators and moving walks, passenger boarding bridges, stair and platform lifts as well as tailored service solutions for all products. Over 1,000 locations around the world provide an extensive sales and service network to guarantee closeness to customers.

thyssenkrupp
thyssenkrupp is a technology group with strengths in materials. Over 162,000 employees in 78 countries work with passion and technological know-how to develop high-quality products and intelligent industrial processes and services for sustainable progress. Their skills and commitment are the basis of our success. In fiscal year 2018/2019 thyssenkrupp generated sales of €42.0 billion. Together with our customers we develop competitive solutions for future challenges in their respective industries. With our engineering expertise we enable our customers to gain an edge in the global market and manufacture innovative products in a cost- and resource-friendly way. Our technologies and innovations are the key to meeting diverse customer and market requirements around the world, growing on the markets of the future, and generating stable earnings, cash flows and value growth.