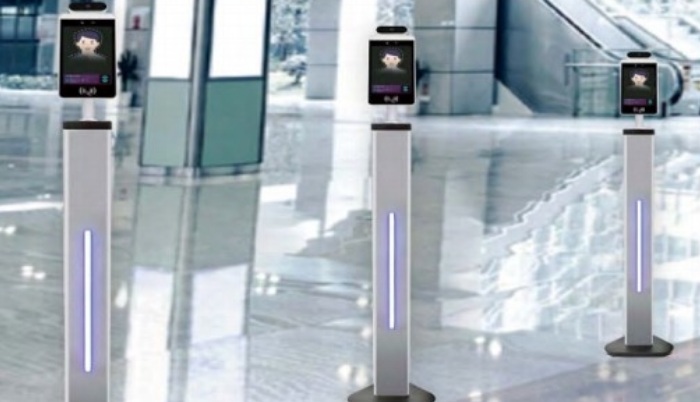 Qualcomm recently announced a portable Android-based body temperature and facial recognition scanner that can be tied to building access control to help schools and businesses reopen safely after months of pandemic.

It is one of various Internet of Things products from Qualcomm powered by AI and fast processors that fit under the heading of smart city innovations. In this example, however, the urgency of the pandemic has come into play.

Several similar building access products with body temperature abilities have cropped up on the market, but Qualcomm says its OneScreen GoSafe system is unique in allowing live video assistance for real-time entry approval. Another distinguishing feature is that Qualcomm offers GoSafe as a service paid on a monthly basis or for an up-front cost. (Pricing was not disclosed.) By comparison, one of several competitors, 98.6 Labs, offers something similar as a kiosk device starting at $3,000.

GoSafe relies on Qualcomm AI technology and a Snapdragon Octa-Core processor for optional facial recognition. It will even be able to tell if a person is wearing a mask before allowing entry when connected to a building security system. The GoSafe device looks like an oversized smartphone (11 x 5 inches) that can be mounted on a wall or a pedestal or placed on a table top stand. Managers can tie the data detected at each entry to a management console.

“You have to go tech by tech and go vertical,” Pandit said in an interview with FierceElectronics. “The future is to deploy with smart verticals. You cannot paint the town red with smart tech. You have to make sure you are enhancing the efficiency of human life.”

For example, within a corporate or university campus, Qualcomm will provide building management as a service, as well as smart lighting, parking and smarter safety and security.

Qualcomm has also embraced partnerships to bring smart city tech to life. On Monday, the chipmaker announced a strategic collaboration with JLC Infrastructure and IGNITE Cities to develop smart and connected tech in commercial, industrial and municipal sectors. Qualcomm will bring tech leadership and innovation, while JLC will leverage its network of municipal and construction connections. IGNITE has expertise in building municipal partnerships.

JLC will allocate an initial $75 million in capital for investment in projects developed with Qualcomm and IGNITE.

The facilities affected by the collaboration could be as varied as a mall, a campus, an elderly home or a parking infrastructure, Pandit said. “Our chips act as a gateway, sending back data as we bring analytics and processing to the edge,” he added.

The collaboration will work with multiple cities offering smart construction as a service, Pandit added. “It’s a unique concept of taking over IoT as a service with the vendor financing the tech and offering expertise to run the service with the system.” A city in an unidentified Nordic country and a New York-based university as well as University of California at San Diego are at various stages in discussing the overall concept with the collaboration team.

Smart city has evolved beyond a catchphrase, Pandit said.

Years ago, “there was a lot of initial buzz about smart cities and it kind of fizzled out,” Pandit said. “That was because a lot had to be done and there was no one spot to go and kickstart it. There was immense fragmentation. When it first started, people would say, what is the platform? What is the playbook? This collaboration is the Match.com of smart cities.”