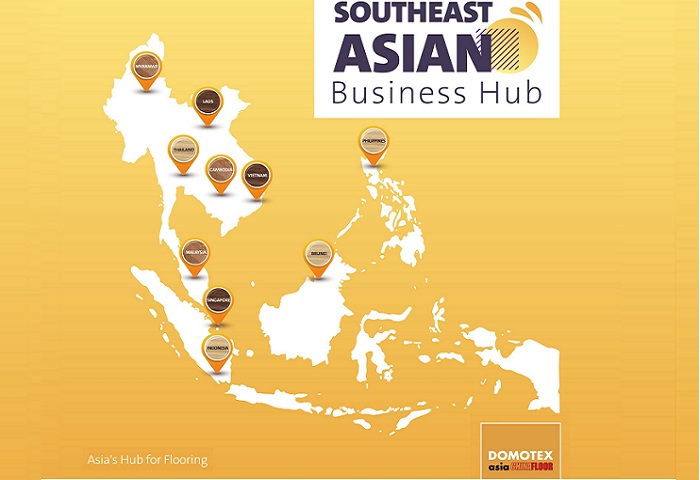 China has long been the country that comes to mind when importers hear the term “manufacturing hub”. And China does still hold some major competitive advantages over its smaller manufacturing counterparts. However with the last few years U.S. tariffs against China there has been a slowdown in the commercial relations between the two countries.

Several Chinese producers have found a solution in moving part of their production lines to Southeast Asian countries. This move not only helps them control quality and keep prices as low as before but it also enables business dealings with their U.S. counterparts. The most common countries chosen in the region are Malaysia, Thailand, Cambodia, Indonesia and Vietnam.

Keeping up with the trend, the 22nd edition of DOMOTEX asia/CHINAFLOOR launches the first Southeast Asian Business Hub – an exclusive area showcasing resilient and wood flooring exhibitors with production facilities in the Southeast Asian region.The Hub is located in N2 Hall of the Shanghai New International Expo Center and is ideally situated in the center of the Hall, thus becoming a gateway for the first Southeast Asian representation. With more than 800 sqm booth space and a distinguished area, the Hub will undoubtedly attract attention of the industry professionals.

Royal Crystal–one of the leading Vietnamese flooring brands booked the space a few days after the announcement of the new area. The domestic companies are also lining up for a booth in the Southeast Asian Business Hub.One of the first comers is Tianzhen Flooring. Established in 2003 in Anjicity, the company has a long history of export to the USA, Europe, Canada, Korea, Japan and Australia.Last year they decided to move a part of their production lines to Vietnam and since last month the factory is operational and producing LVT, WPC and SPC flooring.

“Tariffs have resulted in manufacturing being developed in countries in Southeast Asia, mostly though Asian manufactures expanding into different countries”– says Thomas Baert, president of Firmfit and CFL Flooring–“uncertainty will not disappear anytime soon, even if certain 301 tariffs have recently been rescinded. Our target is to be able to continue to provide flexible solutions that are above geopolitical risks”. Earlier this year CFL also moved some of the production lines to Vietnam. For more information about the show visit www.domotexasiachinafloor.com