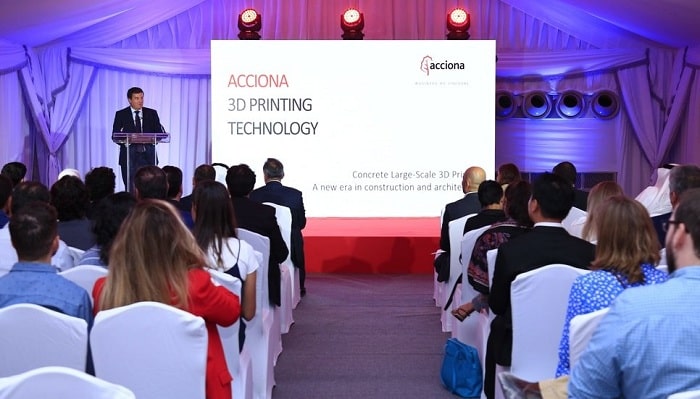 The new facilities feature the world’s largest operational 3D printer using Powder Bed technology. This technology is particularly suitable for generating highly resistant structural parts. In addition, the technique uses concrete as base material, which renders it an ideal solution for architectural, urban and building applications.

The printer, with 6x3x2 meters in size, allows greater efficiency and automation of the construction processes. The 3D technology offers a freedom of architectural and urban design that had previously been unthinkable. It also opens the way to scientifically documenting heritage items and making replicas from their digital copies, which enables the public to contemplate identical reproductions.

ACCIONA’s new production facility is the culmination of an internal development process in the Innovation area starting in 2016, which has enabled the technology to be fine-tuned for commercial use.

During this process, ACCIONA achieved milestones such as the first walkway in the world made using 3D printing, in Alcobendas (Madrid, Spain), or the first architectural piece of cultural heritage made on a real scale using 3D printing on concrete, the Romanesque arch of San Pedro de las Dueñas, in collaboration with the National Archaeological Museum of Spain (MAN).

ACCIONA has chosen Dubai to install its 3D printing center in order to support the emirate’s commitment to deploying this technology in all economic fields and, specifically, in the construction sector.

Among the concrete initiatives included in the Strategy is the introduction of a new law under which 25% of new buildings’ components must be manufactured with 3D technology by 2025.

A sustainable and versatile technology

3D printing, or additive manufacturing using Power Bed technology, allows the creation of a three-dimensional through the superimposing of successive layers of material automatically. The technique facilitates the production of highly complex pieces from 3D digital models. Introducing concrete as the base material offers additional durability and strength.

Large-scale 3D printing in concrete offers the possibility of constructing structural elements with total freedom of form, without the need for molds or formwork, which permits a more efficient development of complex structures.

The technology also employs less energy and resources in producing concrete building elements and allows us to reduce the amount of waste generated in manufacturing, thanks to the recycling of raw materials.
ACCIONA in Dubai

ACCIONA opened its first Middle East office in Dubai in 2008. Since then, the country has been the center point from which it has developed its business activities throughout the Gulf region and other Arab countries.

ACCIONA has been awarded several water facilities in United Arab Emirates, with locations in Dubai and Fujairah, such as the Fujairah1 reverse osmosis desalination plant, with a capacity of 136,000 m3/day and the 181,000m3/day desalination plant in Dubai.

Through its Construction division, ACCIONA is extending the Dubai Metro Red Line for Expo 2020 and modernizing the Red and Green Lines.

In addition, the company is building one of the largest photovoltaic plants in the world, the Mohammed Bin Rashid Al Maktoum Solar Park (Phase III), in Dubai.

ACCIONA Producciones y Diseño, which specializes in museography and events, also has a presence in the Middle East and North Africa region, especially Dubai. 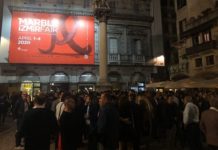 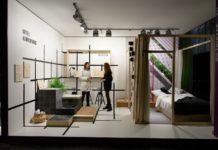 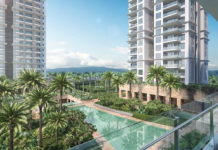