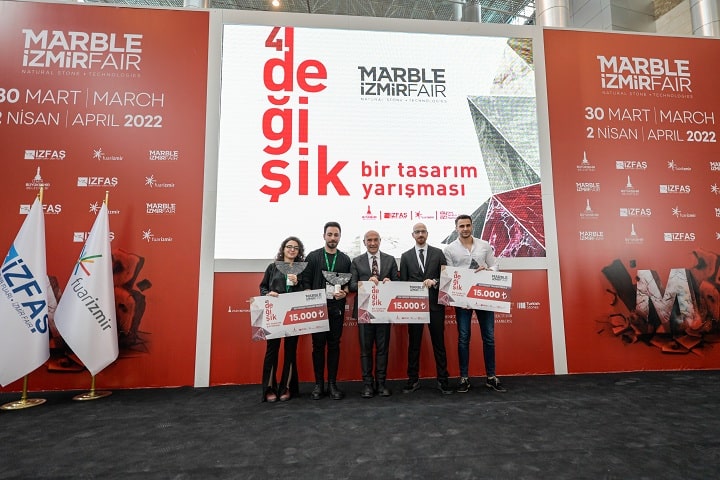 Marble İzmir Fair, the lifeline of Türkiye’s natural stone exports, hosted the world market of the sector at Fuarizmir between the dates of March 30 and April 2.

A total of 78,096 people, 8,590 of whom were foreigners from 145 countries, visited the fair, in which million-dollar agreements were made with 1,015 participants in an exhibition area of 150 thousand square meters. The sector began to look forward to the 28th Marble İzmir, which will be held on April 26-29, 2023.

The export gate of the natural stone industry, the 27th Marble İzmir Fair, gave hope to the new year with the intense trade volume it provided. The fair, where the A, B, C, and D halls of Fuarizmir and the entire open area were allocated, took place with a huge operation of 150 thousand square meters. The fair where product groups such as natural stone, processed and semi-processed stone, marble machinery, construction equipment, and consumables were exhibited, brought together 1,015 exhibitors with 78,096 visitors from 145 countries. The fair, where sales were made before the start of sales, all exhibited products were sold and new orders were received, provided the industry with a trade volume of millions of dollars for four days.

Millions of dollars sales were made

Stones extracted from all quarries of Türkiye, with 650 different colors and textures of natural stone, were introduced to the world in all their forms, from blocks to processed products. While all of the 1,138 blocks, varying between $80 and $3,000 per ton, were sold, national and international participants completed their orders for 2022 with the products they exhibited. The fair drew attention with its machinery area where the latest technology products were exhibited as well as natural stone. The products, in which nearly 500 machines were exhibited, found buyers in a price range ranging from 5 thousand dollars to 500 thousand dollars. The representatives of the machinery sector, which achieved million-dollar sales, stated that the sales will continue throughout the year with the cooperation established at the fair. 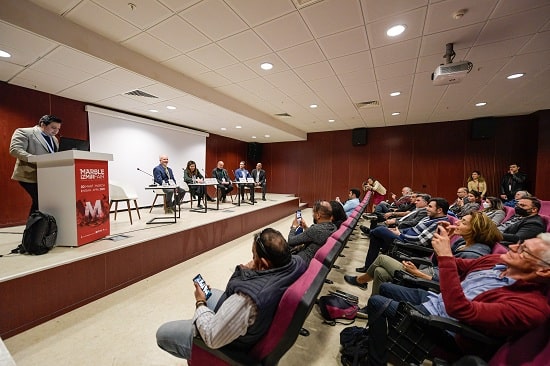 Stating that they had a good fair and they were very pleased with it, İZFAŞ General Manager CananKaraosmanoğluAlıcı said, “We hosted our professionals, who visited the fair, from 145 countries. Despite the pandemic, we showed serious courage and opened our doors in August of 2021. Maybe it was not the usual season for the fair, but we still created a good trade volume. And we promised our participants that we will raise the bar very high at the fair we will hold there this year. 27th Marble İzmir was full of visitors. We have created a good trading channel for our participants. The most important feature of our fair is that it is a giant and well-known fair in the international arena. Together with our exporter associations, we realized a very successful buyer program. With the same dedication and will, we started our work for the 28th Marble. Marble Fair suits İzmir very well.”

Full support to the fair with the buyer delegation

The 4th Novel Natural Stone Design Competition awards, in which young designers participated with original projects they created using natural stone, were also given their owners within the scope of the fair. The three best projects selected among the products were entitled to receive the “Marble Most Novel Design Award” and a monetary award of 15 thousand TL. Teos by TanerVural, Turn and Relax by FeyzaBaşak and Ant by Mehmet Tekin and TahsinDemir won the Marble Most Novel Design Awards. The awards were given by TunçSoyer, Mayor of İzmir Metropolitan Municipality. The designs that made it to the top 17 out of 46 were put into practice with the product sponsorship of the exhibitor companies and exhibited in Foyer Area A during the fair.

An intercontinental call to the use of natural stone

Within the scope of the fair, interviews were held with the participation of international natural stone experts about the position of natural stone in the world. Marble interviews, which were held in two different sessions on “Human-made Materials against Natural Stone: External Applications” and “Different Uses of Marble in Design and Architecture”, took place at the Fuarizmir Seminar Hall B. In the conversations, where experts in the field were speakers, there were participants from America, Iran, Qatar, and Poland.

Contribution to the city economy

The mobility that started in the city before the fair, which lasted for four days, continued during the Marble period. Domestic and foreign participants and visitors made their reservations at the hotels days in advance. During the fair, occupancy rates reached the maximum level in almost every hotel in İzmir. In addition to the accommodation sector, the mobility experienced especially in restaurants and transportation pleased the service sector in the city. İZFAŞ aims to create a trade volume worth 100 million dollars for the İzmir economy this year with the fairs it organizes.

China announced recently a nationwide loosening of COVID19 restrictions. The announcement comes as a positive sign on the future of the exhibition industry and...