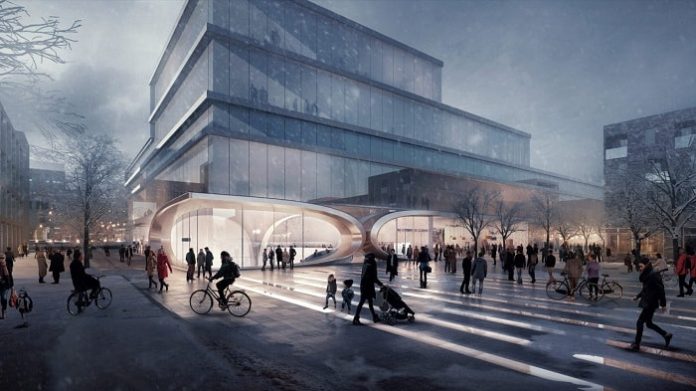 Two stations inspired by glacial landscapes are being designed by architecture studios Zaha Hadid Architects and A-Lab for a new metro line in the Norwegian capital.

The Fornebubanen metro line will be a five-mile sub-surface route connecting a new neighbourhood on Oslo’s Fornebu peninsula with the city centre.

London-based Zaha Hadid Architects (ZHA) and Oslo-based A-Lab have won a competition to design two of the six stations along the line.

The two studios reference Norway’s glacier-carved landscape in their designs for the new Fornbuporten and Fornebu Senter stations.

Canyon-like forms will be carved to guide the flow of people in and out of the Fornebu Senter station, in shapes reminiscent of mountains and fjords. At street level public plazas will gradually meld into the entryways.

Meanwhile Fornbuporten will feature a pair of entrance pavilions, positioned beside public spaces on both sides of the station. Both will feature reflective surfaces, designed to cast a spectrum of light across their surroundings.

The northern entrance will feature a orthogonal-shaped pavilion and plaza, while the southern end will comprise an oval canopy set in a park.

Lighting inside the metro stations will change according to the time of day, in order to “enhance passengers’ well-being”. Zaha Hadid Archtiects and A_Lab to design stations for Oslo metro line

Oslo’s population has grown to almost a million, but urban expansion is curtailed by the protected habitats and natural geographies of Oslofjord to the south and the surrounding mountains and forests.

The new Fornebu urban centre is being creating on the site of a decommissioned airport, providing 6,000 homes. The Fornebubanen metro line will connect this area with the Majorstuen interchange in just 12 minutes. Zaha Hadid Archtiects and A_Lab to design stations for Oslo metro line

“The Fornebubanen will be a vital new transport link for the city,” said Gianluca Racana, director of Zaha Hadid Architects.

“People have been waiting for the Fornebubanen for a long time,” added Geir Haaversen, founder of A-Lab. “The design of these stations will be crucial for the development of their locations.” Zaha Hadid Archtiects and A_Lab to design stations for Oslo metro line

Other new buildings being created on the peninsula include New Aquarium, a project by London studio Haptic featuring an undulating roof dome.

Haptic is also working on the design of a sustainable new airport for the city, in collaboration with Nordic Office of Architecture. Billed as “the largest airport in the world”, it is scheduled to complete in 2020.

Construction will begin on the Fornebubanen metro line in 2020, with completion due by 2025.