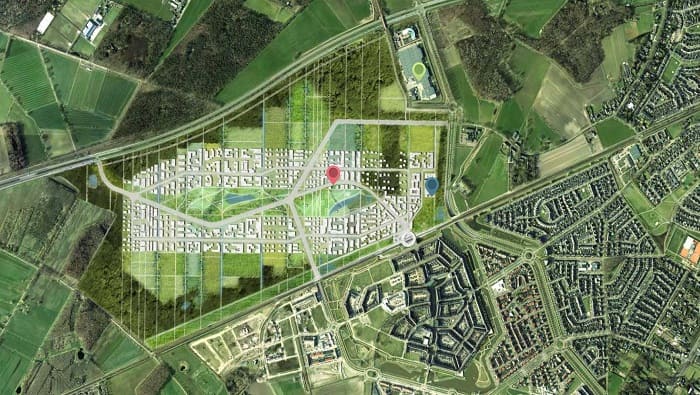 Architecture technology company UNSense has commissioned two subsidiaries of Dutch contractor VolkerWessels to build a housing scheme in the Netherlands that will test the latest systems for housing, energy, mobility and health.

UNSense, an offshoot of Amsterdam architect UNStudio, was commissioned by the Brainport Smart District Foundation to add the “100-home Project” to Helmond, a town in the south of the country. The VolkerWessels subsidiaries, SDK Vastgoed and VolkerWessels Telecom, will build the homes and install the surrounding infrastructure.

The scheme, which is being overseen by the Brainport Smart District Foundation, is part of the UNStudio’s masterplan for the expansion of the Brandevoort neighbourhood. This envisages 1,500 permanent and 500 temporary homes, green spaces and 12ha of business park, with the ambition to become the “smartest neighbourhood in the world”.

Among the systems to be installed on the project will be the Ecarcell model for sharing electric vehicles between small groups of residents, who can also hire them out to third parties. The project aims to install 100 cells in Brandevoort and surrounding areas within four years.

The district will be fitted with solar panels that will, it is hoped, generate more energy than the homes use. The surplus will be stored in batteries for use in car charging, and the district will also be connected using a smart grid, allowing surplus energy to be shared between homes.

Data from the district will be analysed to assess how well the energy and transport concepts work in practice, as well as other networks that are intended to promote social inclusion and healthy living styles.

A spokesperson for the Brainport Smart District Foundation told GCR that the project was awaiting final approval from the Helmond municipality, which is expected to be given in May. If it is approved, work on site will probably start in July.

The foundation is a joint enterprise between the municipality of Helmond, Eindhoven University of Technology, Brainport Development, The Province of Noord-Brabant and Tilburg University.