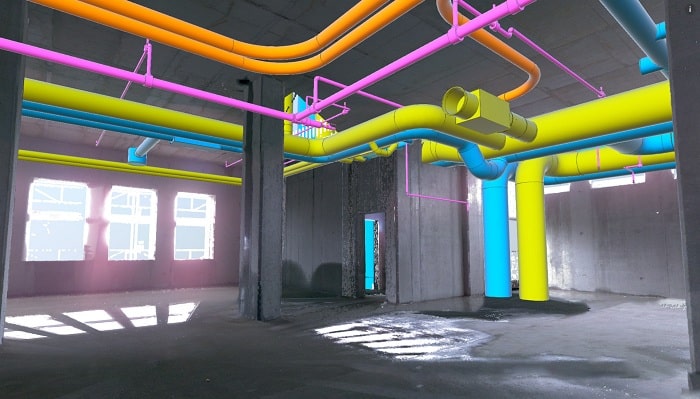 The new University Hospital in Stavanger, one of the biggest public construction projects in Scandinavia, adopted 3D scanning and AI technology to track work quality and avoid costly mistakes.

In Stavanger, the fourth largest city in Norway, located about 300km from Oslo, the construction of the new university hospital is going at full speed. Hundreds of people work on the project, which covers 130,000 sq m.

To closely keep track of the massive project, the developer SUS2023 has chosen to use 3D scanning and Artificial Intelligence throughout the entire construction period. Instead of manual inspections that can take days, or even weeks, everything is checked digitally and with millimetre accuracy. A single person digitises the job site and the entire team can have access to the results.

To do so, the team uses a tech solution developed by Imerso, a start-up company based in Oslo. After the SUS2023 team scans the construction site, Imerso’s platform compares the laser scans against the BIM plans and immediately reports problematic work deviations.

The goal is to detect issues as early as possible, so these can be corrected before the next phase of the construction process begins.

The project members can navigate the virtual job site together collaboratively from their browser, just like being there in person. It is possible to take measurements and screenshots from any perspective, and append comments directly to virtual objects. The team in charge of quality control had one day of training to use the laser scanner and to use the results in Imerso’s platform.

“This is great security for us. It was a big advantage that this solution was so easy to learn and use. I didn’t need much more training than to learn which buttons to press and where to place the laser scanner to achieve the best results,” says Dan Børge Bø, construction manager for SUS2023.

At peak times, up to 1,000 people will be working on the project. The new hospital has a planned capacity for 640 patients and specialised world-class laboratories for day care, radiology and emergency departments. The project was named BIM World Champion in the annual Autodesk Awards, and it is budgeted at approximately £800m.

Imerso makes the use of 3D scanning technology as simple as taking a photo. The only thing necessary to capture the room in 3D is a laser scanner, a tripod and a tablet. All the equipment fits in a backpack. The laser scanner is positioned to capture the area and the entire process is finished after a few minutes.

“All I have to do is press a button. And don’t stand in the scanner’s way. After scanning, I get the point cloud on the tablet. Then I save the scan and upload the results to Imerso,” says Bø. The SUS2023 uses the Leica BLK360 laser scanner, which Imerso recommends, but other laser scanners can also be used.

From there on, Imerso’s system uses the BIM plans as inspection targets and analyses the as-built reality captured in the 3D scans to search for work deviations. The digital twin evolves in parallel with the construction activities and gives alerts of clashes, saving the projects unnecessary costs by enabling the teams to rectify the problems early.

“We can go straight into the platform and check what we need when we need it,” says Henrik Thingbø from Norconsult, Norway’s largest multidisciplinary consultancy firm, responsible for digital strategy in the SUS 2023 project.

This was the first time that a public organisation in Norway opened a competition for such an advanced system. Imerso was selected after SUS2023 opened a tender to the market. “This way, the costs of non-conformity are also reduced,” says Kari Gro Johanson, project director for SUS2023.

In just over two years, Imerso was deployed in over 30 projects – mostly in Norway but also in Sweden, Denmark, Germany, France and Switzerland. The works range from public to commercial and residential buildings.

The tech company has also established a partnership with Leica Geosystems to offer their clients the latest and fastest scanning equipment available. Imerso is also a BuildingSmart member and ensures that all data is available in 100% open formats and compatible with Revit, ArchiCAD, Solibri and others.