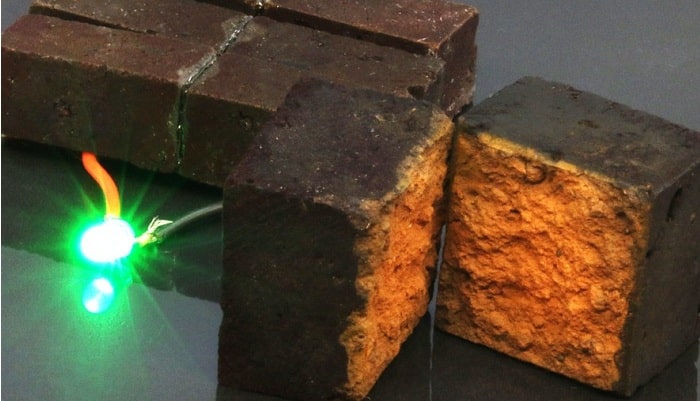 Researchers led by Washington University in St Louis, in Missouri, US, have developed a method that can turn the cheap and widely available building material into “smart bricks” that can store energy like a battery.

Although the research is still in the proof-of-concept stage, the scientists claim that walls made of these bricks “could store a substantial amount of energy” and can “be recharged hundreds of thousands of times within an hour”.

Their findings are published in the journal Nature Communications.

Study author Julio D’Arcy, an assistant professor of chemistry at Washington University, said: “We envision that this could be a reality when you connect our bricks with solar cells – this could take 50 bricks in close proximity to the load.

“These 50 bricks would enable powering emergency lighting for five hours.” The researchers developed a method to convert red bricks into a type of energy storage device called a supercapacitor.

This involved putting a conducting coating, known as Pedot, onto brick samples, which then seeped through the fired bricks’ porous structure, converting them into “energy storing electrodes”.

Iron oxide, which is the red pigment in the bricks, helped with the process, the researchers said.

In a demonstration, the researchers showed their proof-of-concept supercapacitor was able to power a green LED light.

Prof D’Arcy said: “In this work, we have developed a coating of the conducting polymer Pedot, which is comprised of nanofibres that penetrate the inner porous network of a brick; a polymer coating remains trapped in a brick and serves as an ion sponge that stores and conducts electricity.

He added: “Advantageously, a brick wall serving as a supercapacitor can be recharged hundreds of thousands of times within an hour.

“If you connect a couple of bricks, microelectronics sensors would be easily powered.” Commenting on the research, Richard McMahon, professor of power electronics at the University of Warwick, who was not involved in the study, said that, while the work is intriguing, it is a long way from practical application.

He said: “The samples that have been made are small and although some indication is given about how they can be made into bigger units it’s obvious that any useful application would require modules, comprising a number of devices, at least the size of a standard brick.

“There is also the practicality of how to bring out connections and if the capacitors are to be used in series, the question arises as to how many could be series without insulation and, possibly, electrical safety issues.

“Brick is a brittle material and so handling relatively thin sheets for assembly into modules could be an issue.” He added: “In summary, this is interesting work from a materials science perspective but it will be a long road to real applications and it’s hard to see how batteries would be seriously challenged.”