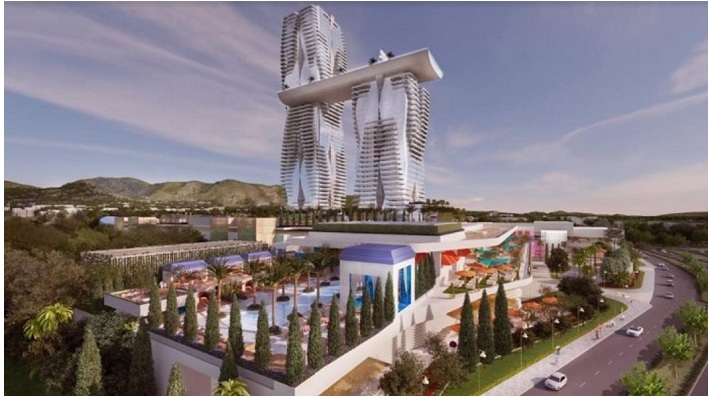 A model of the integrated resort casino, led by the consortium of Mohegan Gaming & Entertainment and its Greek partner GEK Terna. The property will be part of the larger Hellinikon Project.

The Hellenic Gaming Commission accepted the financial proposal of Mohegan Gaming & Entertainment (MGE)-GEK TERNA as provisional winner in the bidding process for the concession of a casino license in the Hellinikon project.

“Everything proceeded as planned and with an exceptional price for the Greek state,” Development Minister Adonis Georgiadis commented on Twitter after the news, noting that the price was five times higher than the minimum bid. “We are moving on,” he said.

The investment, with a net worth of 1.1 billion euros, will kick off the entire development of the area comprising Athens’ old airport on the southern coast.

The complex, which the consortium has named “INSPIRE Athens,” will be developed within and around two main towers, one 200 meters (656 feet) and the other 100 meters (328 feet) tall.

According to the consortium’s bid it will include a super-luxury hotel with 3,450 beds. This corresponds to some 1,700 rooms, market sources estimate. That would be by far the largest five-star hotel, not only in Attica but also in the country, and among the biggest in Europe.

Besides the 120,000-square meter (1,291,669 square foot) hotel, the consortium will develop a conference and exhibition center of 23,700 square meters (255,104 square feet) and a sports and cultural center with a capacity for 10,500 people that could host anything from concerts to soccer games.

The casino itself will cover 15,000 square meters (161,458 square feet) the maximum surface allowed by the presidential decree. There will also be shops, entertainment facilities, restaurants, and other businesses.

The implementation of the investment is expected to start in mid-2021, after the concession contract is ratified by Parliament and construction permits are issued.