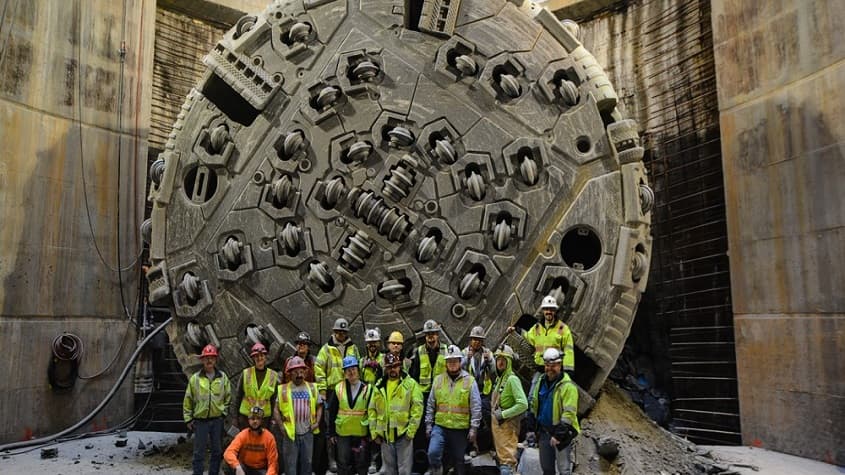 The Lane Construction Corporation and Salini Impregilo recently completed the excavation of the Dugway Storage Tunnel (DST), a $153-million project in Cleveland, Ohio to help reduce the flow of raw sewage into Lake Erie.

The TBM nicknamed Fulvio broke through the wall of the DST-8 shaft on the DST project, bringing to an end a 4.5-kilometer (2.8-mile) journey begun in July 2017. The Dugway Storage Tunnel is 4.5 km long, with a diameter of 8 metres. The contract involves the construction of 6 shafts of varying diameters and depths, connections between the tunnel and the shafts, and a series of concrete structures for the collection and transporting of wastewater and rainwater.

The tunnel, set to go into service in 2019, is the second of seven tunnels commissioned by the Northeast Ohio Regional Sewer District under $3-billion Project “Clean Lake” to reduce CSOs.The Group is involved in similar projects elsewhere in the country, like the Anacostia River Tunnel and the adjacent Northeast Boundary Tunnel (NEBT), in Washington, D.C and the Three Rivers Protection and Overflow Reduction Tunnel in Fort Wayne, Indiana.

About Lane Construction
Founded in 1890, The Lane Construction Corporation is one of America’s leading construction companies, specializing in heavy civil construction services and products in the transportation, infrastructure and energy industries. Lane has a unique combination of capabilities including public-private partnerships/innovative financing and joint ventures; large, complex design-build and bid-build projects; as well as the ability to produce and install asphalt, aggregates and concrete.

Lane Worldwide Infrastructure, Inc., an affiliate of The Lane Construction Corporation, manages Lane’s International Operations, which develops transportation and infrastructure projects in the Middle East.Lane’s 5,600 employees team with customers and partners on diverse projects including highways, bridges, racetracks, mass transit and airport systems, and the development of energy resources. With expertise in the fields of engineering, procurement and construction project management, Lane has the proven capacity to handle multiple, large-scale projects and to quickly mobilize resources to staff any project. The company provides the resources, innovative solutions and emphasis on safety and quality control that produce high-quality results.

About the Salini Impregilo Group
Salini Impregilo is a leading global player in the construction of large, complex civil infrastructure. It specializes in the water sector – where it has been recognized as global leader for the fifth consecutive year by Engineering News-Record (ENR) – as well as railways and metro systems, bridges, roads and motorways, civil and industrial buildings, and airports. The Group has 110 years of applied engineering experience on five continents, with design, engineering and construction operations in 50 countries and more than 35,000 employees from 100 nationalities. Salini Impregilo is a signatory of the United Nations Global Compact and pursues sustainable development objectives to create value for its stakeholders. It assists clients in strategic areas including energy and mobility, helping to drive development and wellbeing for current and future generations. Its leadership status is displayed in projects such as the new Panama Canal, the Grand Ethiopian Renaissance Dam, the Cityringen metro in Copenhagen, the Riyadh metro system, the Stavros Niarchos cultural centre in Athens, and the new Gerald Desmond Bridge in California. In 2016, revenues totalled €6.1 billion (including U.S. subsidiary Lane Construction, leader in roads and highways), with a total backlog of €36.9 billion.