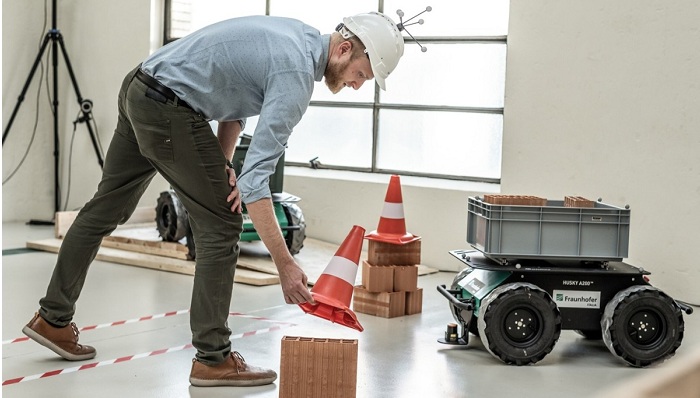 Engineers at the Fraunhofer Italia Innovation Engineering Center (IEC) in Bolzano, Italy, are developing software that would enable a robot assistant to help on construction sites. Based on the Husky A200 research platform, the mobile robot uses new navigational software to carry out autonomous logistics tasks.

Robots are already moving into our homes and soon they may be helping to build them as well. Construction is a complex, expensive, and ever-shifting task requiring a lot of teamwork and constant adaptation as an empty lot turns into a completed building, and robots would be a great help in speeding things up while bringing down costs.

However, a construction site often seems like an exercise in organized chaos that is difficult to navigate even for a human, let alone a robot. With the goal of bringing robotics into the construction field, the Fraunhofer affiliate is developing a new software interface that would link building information modeling (BIM) with the Robot Operating System (ROS), a modular open-source operating system that supports a number of programming languages to allow robotics engineers to quickly develop robot systems.

Digitalization offers the construction industry unprecedented possibilities for an integrative way of working,” says Carmen Marcher, leader of the Process Engineering in Construction research team. “BIM is a key component in the digitalization of construction. The combination of this innovative working method and robotics is one of the many opportunities that digitalization offers to this industry. At Fraunhofer Italia IEC, we have created an interface that connects BIM to commercially available research robots so they can use BIM data.”

The new interface processes time-sensitive information for database updates about obstacles on the construction site that the robot’s sensors can have trouble detecting directly, allowing it to avoid hazards like an open lift shaft, for example.

According to Fraunhofer, this digital building data helps the robot assistant to transport heavy loads of construction materials and tools around a building site safely. For navigation over rough, changing terrain, the mobile robot uses an electronic control unit and acceleration, laser and inclination sensors. In addition, it can follow a human worker when its follow-me function is activated.

Currently, the robot assistant has been confined to indoor tests, but the goal is for robots like it to move out into the real world to help not only builders, but also farmers.