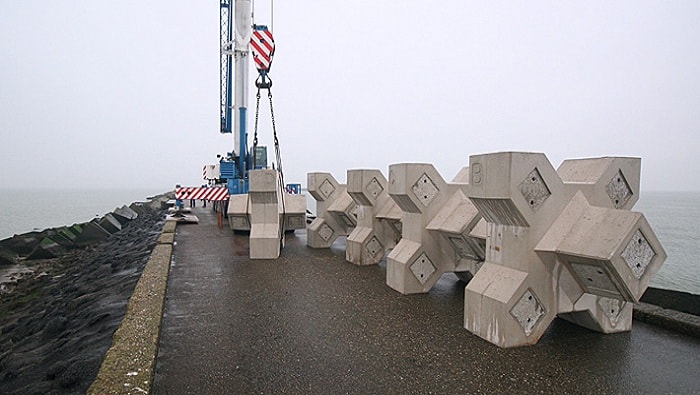 BAM subsidiary Delta Marine Consultants (DMC) has signed a licence agreement for its new XblocPlus blocks to be used on a marina project in Albania.

Marina Porto Albania will be the first international project to use XblocPlus, following adoption on a major Dutch project.

Pieter Bakker, DMC’s global manager Xbloc, said: “We are very pleased that only six months after the market introduction, XblocPlus has already been selected for two high profile projects. In both projects, clients have chosen for an armour layer which is economical, stable and robust, but also a solution which contributes to the aesthetic quality of the project by the beautiful placement pattern of the XblocPlus layer.”

Block production by SEL is expected to start shortly and the objective is to complete the breakwaters by early 2020.

The first Dutch project to use the XblocPlus design is the Afsluitdijk, where the block is being applied under the name Levvel-blocks, named after the Levvel consortium of BAM, Van Oord and Rebel that is strengthening the dyke. The project is being carried out on behalf of Rijkswaterstaat, which is part of the Dutch Ministry of Infrastructure & Water Management.

XblocPlus is a further development of the Xbloc which has been in use around the world for 15 years. The company said that, compared to other blocks in the market, XblocPlus requires significantly less concrete and fewer blocks to cover the same breakwater. The similarity to roof toles makes regular block placement of the new unit is fast, safe and efficient, it said, with a resulting smooth look.

The XblocPlus will be applied on the straight and mildly curved breakwater sections at Marina Porto Albania where the blocks can be placed fast and efficiently in the rooftile pattern whereas the flexibility of the original Xbloc unit will be used on the breakwater heads where it provides protection on the sharply curved surface area.