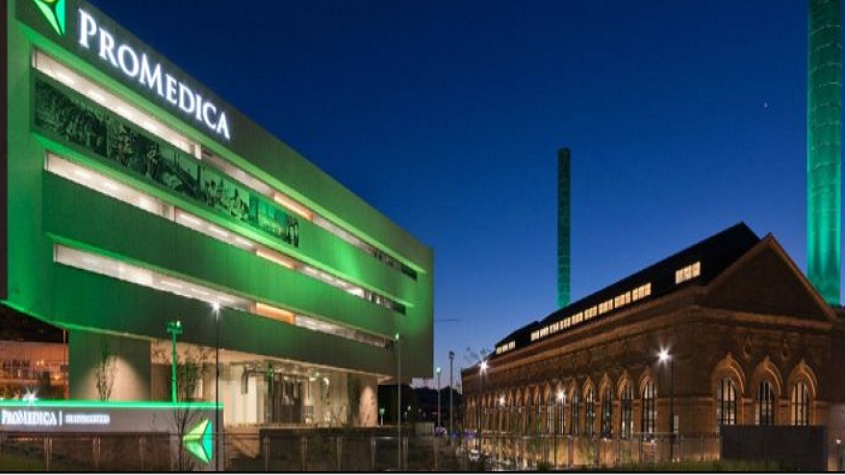 ProMedica, a nationally recognized health care network, renewed its commitment to Toledo, Ohio, by building a unified headquarters at the city’s core. The state-of-the-art workplace stands as a symbol of rebirth for Toledo’s downtown area and a catalyst for future development.

The Steam Plant was originally designed by nationally renowned architect Daniel H. Burnham, and built in 1896 as the Toledo Edison Water Street Station. Over the years, interior renovations weakened the building’s structural integrity, but before closing it completely in 1985, the city of Toledo installed red iron support steel to stabilize it.

The 19th century building, which was listed on the National Register of Historic Places in June 2003, stood empty for 30 years before ProMedica purchased it. The project team—architect HKS Inc., Chicago; construction manager Rudolph Libbe Inc., Walbridge, Ohio; and structural steel contractor GEM Inc., a Rudolph Libbe Group company, Walbridge—was faced with the challenge of creating a contemporary, four-story office building inside a single-story, structurally delicate shell, along with adding a new, three-story addition with floor-to-ceiling windows to adjoin the east wall.

To make The Steam Plant structurally sound, the project team developed and implemented a complex sequential process that involved threading a new structural steel frame throughout the building, while keeping the old red iron support steel in place. And in preparation for the construction of the three-story addition, a complex demolition sequence was required to remove the building’s east wall. For structural reasons, the wall could not be removed at one time, and therefore was removed in phases, one alternating bay at a time, with sections left intact to maintain structural stability.

Elements of the old plant were carefully preserved or replicated, including brick from the demolished wall that was hand-scraped and salvaged for reuse in the renovation. All steel roof trusses were preserved, while the brick façade underwent repair and a power wash. The signature arched window openings were also preserved, and new windows with custom profiles were installed. The original, deteriorating wooden frames and mullions were replaced with custom-made duplicates, and the original interior brickwork was preserved with exposed steel along the walls and ceiling.

The Steam Plant’s new three-story addition has floor-to-ceiling windows facing the river walk, and a history wall on the first floor that tells the story of the site from the 1650s to the present. Smaller murals in both buildings highlight some of Toledo’s most prominent citizens who played a role in the development of the riverfront.

The original Steam Plant featured two, 215-foot-tall smokestacks that towered above the Maumee Riverfront for over a century. Unable to preserve them, the existing steel stacks and masonry pedestals were removed to grade, with one section of reclaimed steel used in the “Echo” sculpture featuring a series of 11 steel rings that form a walking path in the adjacent park.

“I am proud to have been a part of such a historic project for ProMedica and the City of Toledo,” says Tony Hujik, project manager at Rudolph Libbe. “ProMedica could have easily built a new headquarters someplace else, but they chose to refurbish the old Steam Plant and bring everyone together in downtown Toledo. This shows ProMedica’s commitment to the rich history and to the revitalization of the City of Toledo.”