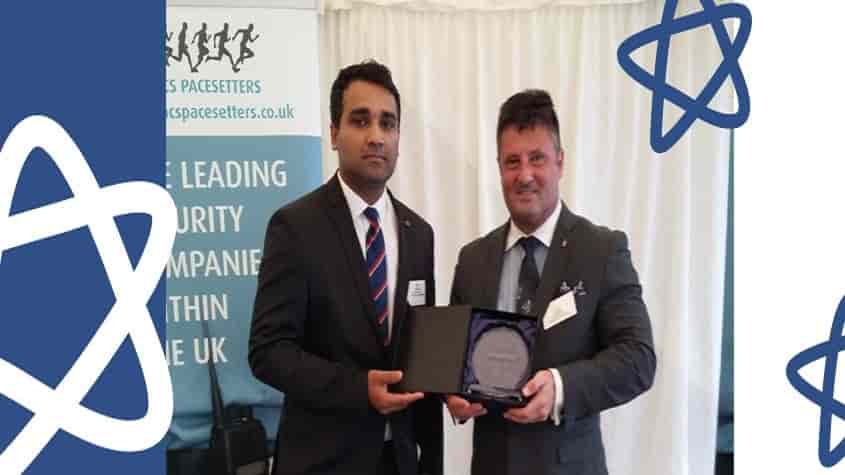 Adeel Usman (Adi), Security officer at TC Security Services, has received an “Officer of Distinction” award at a lunch hosted by ACS Pacesetters at Royal Windsor Race Course on Wednesday 24th May, 2017.

He was nominated by Andy Jenkins, the Operations Manager at Vicarage Road Stadium, home of Premier League Watford Football Club and where Adi has worked since the Autumn of 2016.

It is here where Adi along with the rest of the TC Security Services team provide a range of services including manned guarding, CCTV alongside a raft of added value services to help reduce risk and maintain excellent Health & Safety at the stadium and training ground.

Andy nominated Adi after his quick-thinking, diligence and observation skills resulted in an intruder being apprehended and arrested, safeguarding the 22,000-seater Vicarage Road ground.

As part of his regular patrol of the site, Adi became conscious of an intruder and used the state-of-the-art camera technology at use in the ground to identify the intruder’s location as a thorough physical search of the area had not been successful. The cameras identified the precise location of the intruder, and although when the police initially attended, the suspect had disappeared, thanks to Adi’s ongoing diligence and observation skills the intruder was successfully apprehended and arrested.

On hearing about the award, Adi played the incident down and was surprised that he would be recognised in this way.

He said,At first I was surprised as I never expected to be nominated to receive an award. After my surprise I then realised that my hard work had been recognized, and it felt good.

When asked whether there are any particular highlights of his role, without any pause or hesitation, Adi said,I’m enjoying a great experience at the Watford FC site as I get to interact with various professionals with whom I’ve a strong bond has been created between us and with staff who are very supportive and friendly.

Talking more broadly, Adi mentioned how the awards lunch was an eye-opener to the importance of what the whole team do as security officers in ensuring protection and safety for all that is greatly valued. The stories from other people reflected our impact on society in general.

Adi’s diligence and quick-thinking provides testament to the commitment TC Security Services display to their clients, their people and a determination to provide customer-focussed service to provide complete peace of mind.

The awards started in 2014.  Since then winners of this award programme from TC Security Services have been Paul Hodgson, Steve Thake, Alan Cutts.