This modern interpretation of Speicherstad’s dusky-red brick buildings is sliced through with a shard of glass, welcoming visitors into an angular atrium towards a more secluded central courtyard.

Speaking on his latest creation, Erick van Egeraat details: “I wanted to elaborate on the existing quality of the historic waterfront in a contemporary manner, so the Sumatrakontor needed to combine a number of qualities in both function and appearance. In this way the building really becomes an attribution in the activation of the city.”

Enclosed within the four separate volumes that comprise the complex are a five star hotel, various office and conference facilities, retail units, luxury housing, and underground parking amenities. The entire 37,000 sq m, ten storey building is anchored by a splintered lobby illuminated by natural light which pours through the generous expanses of glass in the northern façade.

Counteracting the red-brick, aluminium and glass of the external façades is a neutrally decorated inner courtyard which references the calm comfort of the traditional white plastered facades in Hamburg’s city centre. This core void acts as the resident’s garden and breakout space for office workers.

Reflecting on the building’s response to its immediate neighbours, the practice explains: “Whilst the original masterplan set out to develop the ‘Hafencity’ with simple building blocks, Erick van Egeraat’s interpretation is an evolution. In a playful manner the Sumatrakontor evolves upon the urban-rules set out in the masterplan, but it also leaves room for chance, for interpretation.” 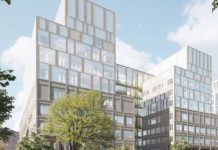 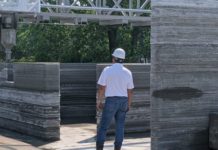 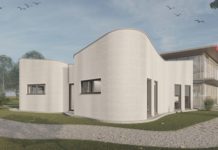