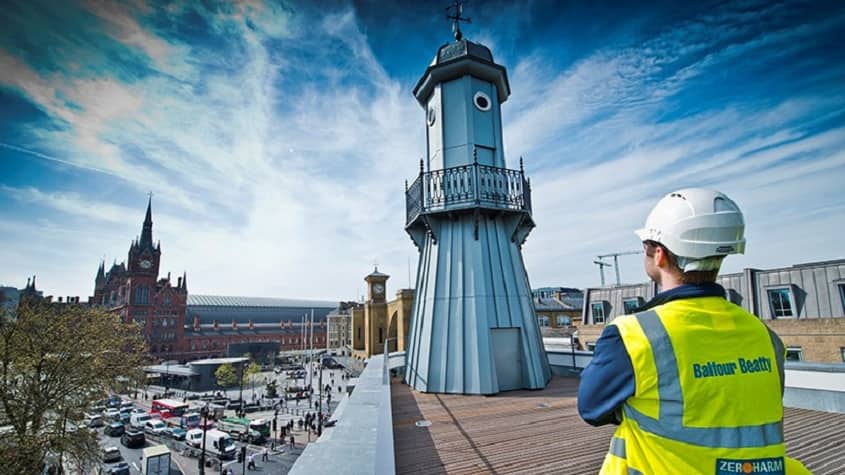 Balfour Beatty, the international infrastructure group, has reached a key milestone in the first phase of its Perth Transport Futures project with the steel beams to support the new road bridge on the A9 dual carriageway now in place.

Balfour Beatty is undertaking the works on behalf of Perth and Kinross Council under the Scape National Civil Engineering and Infrastructure Framework. On completion, the project will see the creation of a new junction on the A9 dual carriageway, as well as a new link road. This will enable access to development land to the west of the city and support growth in Scotland’s third busiest region.

At project outset, Balfour Beatty committed to making a sustainable contribution to the local economy. To date, the company has engaged with over 50 local suppliers and subcontractors and provided new work opportunities to ten local residents, including four previously long-term unemployed people. Alongside its community engagement programme, Balfour Beatty has actively sourced all of its steel from British manufacturers, with over half originating in Scotland.

Hector Macaulay, Balfour Beatty’s Regional Managing Director for Scotland, said: “We are delighted to have reached this key milestone on the Perth Transport Futures project, and in doing so, to have made a significant contribution to the local economy and community.

“We appreciate the patience of the travelling public during this phase of the works and look forward to seeing further visible changes taking place over the coming months, providing Perth and Kinross Council with the vital infrastructure to enable their exciting regional growth plans.”

Councillor Colin Stewart, Convener of Environment, Enterprise & Infrastructure for Perth & Kinross Council, said: “It is good to see that significant progress continues to be made with the A9/A85 junction improvements and new link road to Bertha Park. Now that the steel bridge beams are in place this project is really beginning to take shape.”

Our main geographies are the UK, US and South East Asia. Over the last 100 years we have created iconic buildings and infrastructure all over the world including the London Olympics’ Aquatic Centre, Hong Kong’s first Zero Carbon building, the National Museum of the Marine Corps in the US and the Channel Tunnel Rail Link.

Balfour Beatty, the international infrastructure group, has been operating in Scotland for over a century. Today, the company employs 2,000 people across Scotland and works with a supply chain that includes a substantial proportion of local businesses.

The company’s construction business recently completed the award winning Holyrood Student Accommodation development, providing 1,180 student beds within the World Heritage Site of Holyrood in the City of Edinburgh and  the construction of a Typhoon Propulsion Service Facility to support the rebuild and supply of the EJ200 engines used by 3 Typhoon Squadron.

Significant projects in the Company’s current portfolio include the Aberdeen Western Peripheral Route which will improve the transport network in Aberdeen and across the north east of Scotland, the £14m Almondbank Flood Defence Scheme to deliver a series of flood defences along the River Almond and construct a temporary flood storage unit and the £30m Kennedy Street Student Accommodation project in Glasgow which will feature 536 bedrooms, split over two blocks around a stunning central courtyard.

Iconic projects of the past include the refurbishment of Forth Bridge which was nominated for UNESCO World Heritage Status and carries the East Coast Mainline over the Firth of Forth, the Fife General Hospital and Maternity Services provision which centralises specialist in-patient, acute and emergency services on one site and the restoration and extension of Lewis Castle and Museum Nan Eilean to provide a new museum, archive and hospitality facility on the Isle of Lewis.