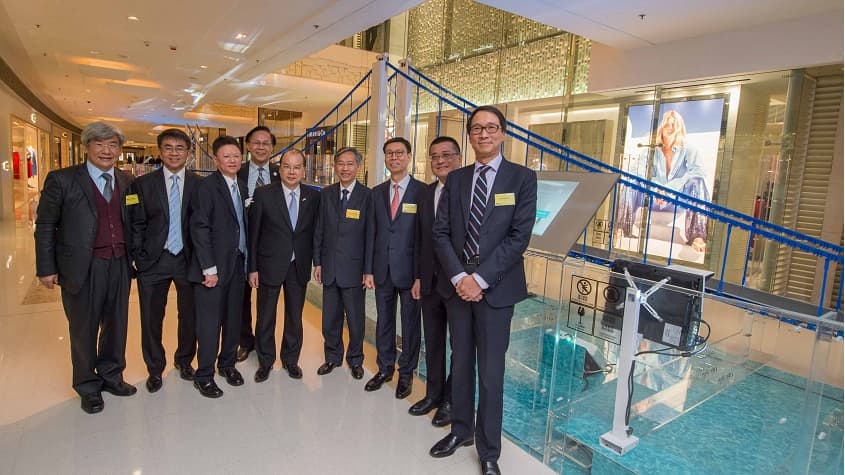 Assisting them to bring this construction to Hong Kong is Bright Bricks, U.K.-based builder of large-scale LEGO® constructions worldwide and LEGO® Certified Professionals.

The Honourable Matthew Cheung Kin-chung, Chief Secretary for Administration of the Government of the Hong Kong S.A.R., was the officiating guest for the afternoon ceremony which marked the exhibition’s official opening to the public.

Designed by Dr. Robin Sham, AECOM’s Global Long Span and Specialty Bridges Director, the bridge was built with over 260,000 LEGO® bricks, is more than 33-meters long – with the longest span measuring 16 meters – and weighs more than a half-metric ton. The model suspension bridge was first assembled in 2016 at the ICE library in London and was awarded a Guinness World Record distinction.

“ICE celebrates its 200th anniversary in 2018 and as one of its largest membership regions in the world, ICE Hong Kong Association wished to commemorate this bicentennial in a fun, informative and seminal way. With this exhibition, we showcase civil engineering and wish to ignite new excitement for the ingenuity, creativity and contributions of our profession amongst a new generation of Hong Kong youth,” said Professor Ken Ho, Chairman, ICE Hong Kong Association.

“World-class infrastructure has been critical to Hong Kong’s continuous ranking among the world’s most competitive economies, and civil engineering has played a pivotal role in this: from delivering next-generation bridges, tunnels and integrated transport systems that enhance mobility; to resilient slopes that boost safety; to reclamation and caverns for increased land supply; and to sustainable water and waste management systems,” said Charlton Wong, AECOM’s Greater China Chief Executive.

Designer of the bridge, Dr. Sham, who was named a Commander of the Order of the British Empire (CBE) in Queen Elizabeth II’s 2018 New Year Honours List, for services to the civil engineering profession said, “I was born in Hong Kong and I am privileged to have the opportunity to return as an accomplished engineer to contribute to the construction of the Kap Shui Mun Bridge.”

“Over the years, across my career with AECOM, my work on other landmark bridges such as the Stonecutters and Sutong Bridges, two of the world’s longest cable-stayed bridges, has expanded to creating long span bridges in many countries across the globe. Connecting people and places by bridges is one of the most challenging but satisfying of all human endeavours. I hope that through this bridge built entirely with LEGO® bricks, a new generation of Hong Kong youth can be inspired to positively impact the built environment for the future,” added Dr. Sham.

“MTR is proud to join ICE and AECOM in bringing this wonderful construction ‘home’ to Hong Kong,” said David Tang, Property Director, MTR Corporation. “We’re extremely pleased that MTR premises ELEMENTS, among Hong Kong’s landmark shopping, dining, recreation and tourism destinations, is home to the world’s longest span bridge built with LEGO® bricks and we encourage everyone to come and enjoy this marvel of civil engineering.”

About Institution of Civil Engineers
ICE is one of the world’s most respected professional engineering associations. Established in 1818, it has 92,000 members across the globe. ICE’s vision is to place civil engineering at the heart of society, delivering sustainable development through knowledge, skills and professional expertise. ICE celebrates its bicentenary this year, using it as an opportunity to promote to the general public that civil engineers transform their lives directly, aiming to inspire the next generation to join the profession.
ICE Hong Kong was established in November 1999. It is the largest regions outside the UK with over 6,500 members. You can learn more about ICE by visiting https://www.ice.org.uk/about-ice/near-you/asia-pacific/hong-kong

About AECOMAECOM is built to deliver a better world. We design, build, finance and operate infrastructure assets for governments, businesses and organizations in more than 150 countries. As a fully integrated firm, we connect knowledge and experience across our global network of experts to help clients solve their most complex challenges. From high-performance buildings and infrastructure, to resilient communities and environments, to stable and secure nations, our work is transformative, differentiated and vital. A Fortune 500 firm, AECOM had revenue of approximately $18.2 billion during fiscal year 2017. See how we deliver what others can only imagine at aecom.com

About MTR Corporation
MTR Corporation is regarded as one of the world’s leading railway operators for safety, reliability, customer service and cost efficiency. In its home base of Hong Kong, the Corporation operates ten commuter railway lines, a Light Rail network and a high-speed Airport Express link on which about 5.8 million passenger trips are made on a normal week day. Another 6.5 million passenger trips are made on the rail services it operates outside Hong Kong in the Mainland of China, the United Kingdom, Sweden and Australia. In addition, the Corporation is involved in a range of railway construction projects as well as railway consultancy and contracting services around the world. Leveraging on its railway expertise, the Corporation is involved in the development of transit-related residential and commercial property projects, property management, shopping malls leasing and management, advertising media and telecommunication services.