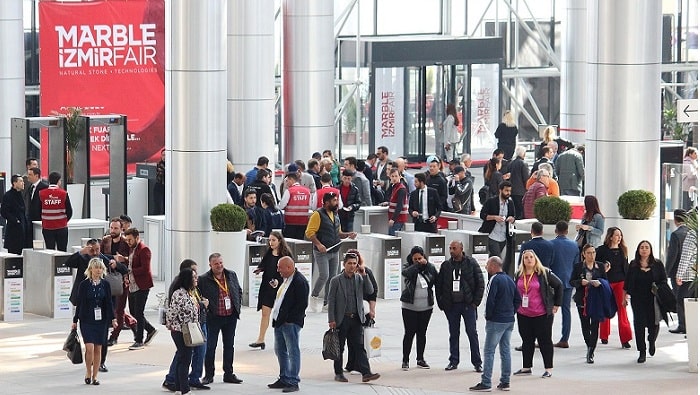 Marble Izmir International Natural Stone and Technologies Fair, the leading fair of the world natural stone industry, will open its doors for the 27th time in Fair Izmir between the dates of March 30 and April 2, 2022.

The strategic planning of Marble Izmir Fair, organized by IZFA and hosted by Izmir Metropolitan Municipality, for 2022 was made at the Advisory Board Meeting that was held online. At the meeting, where a common sense was created with the sector, the works, which are needed to be done in order to make the year 2022 most efficient in terms of fair and the sector, were evaluated. The fair date for 2023 was also decided by the majority of votes. It was agreed that the 2023 Marble Izmir Fair would be held on April 26-29.

Canan Karaosmanoglu Aluci: “Our operational processes continue at full speed and completely”
By sharing information about the sector and the fair, IZFA General Manager Canan Karaosmanoglu Aluci said, “Some fairs in the sector have been postponed or cancelled. However, Marble Izmir Fair is getting ready to open its doors to the whole world for the 27th time between March 30 and April 2. Our operational processes continue at full speed and completely. As soon as the placement processes of our old participants are completed, we will continue our efforts in this direction in order to meet the new demands starting from the second half of February. Fairs are extremely important and necessary organizations in terms of bringing all the actors of the sector together, introducing innovations, and making new commercial connections between participants and visitors. Thanks to marble fairs, it can be explained to the public why natural stone should be used instead of artificial surface coating alternatives such as ceramics and tiles, which have come to the forefront against natural stone recently.”

Al?c? said “Marble Izmir Fair is the lifeblood of Turkey’s natural stone exports. Marble Izmir Fair, which started with 47 local participants in Kültürpark and hosted 4 thousand 719 people, did not champ at the bit in 2005. Thanks to Marble, Turkey has gained a fair area in line with international standards. In 2015, the opening of Fair Izmir was held together with Marble Izmir Fair. This area, which has brought an international brand value to Izmir in fair organization, has been one of the contributions of Marble Izmir to the city. The sector enlarged the fair and the fair enlarged the sector. Our fair, where we act together with our sector with great devotion, will represent the power of our country in the world natural stone trade in 2022 as it does every year.

Waiting in excitement
As in previous years, the expectation is very high at Marble Izmir Fair, which brings together the world natural stone industry that will take place for the 27th time this year. In line with the feedback and requests received from the participants and visitors, all indoor and outdoor areas will be allocated to the use of the participants this year. The target visitor profile of the fair consists of Natural Stone Processing Machinery and Technologies Dealers and Wholesalers, Natural Stone Applicators, Construction and Contracting Companies, Project Management and Consultancy Companies, Building Inspection Companies, Architecture Offices, Construction Markets, Construction Materials Wholesalers, Retailers and Distributors, Construction Machinery Dealers and Wholesalers, Mining and Natural Stone Companies. In line with the demands of our participating companies, visitor activities in a very wide geography, especially in America and European countries, are carried out both directly and through our 3 different regional representatives. The regions where our representatives operate are the USA, the Middle East and Asia, Europe and Russia and they are in close cooperation with our trade attachés in these regions. At the fair, where the target countries are mostly from Europe and the USA, all natural stone companies will be located in the closed halls of Fair Izmir and 60% of the C hall will be allocated to machinery and machinery technology companies.

Sector representatives who attended the Marble Izmir Fair Advisory Board Meeting expressed the following:
Ibrahim Alimoglu, Chairman of the Turkish Marble, Natural Stone and Machinery Manufacturers Association said: “I present my best regards to all our participant friends. I always stand by my sector. Marble Fair is ours. First of all, I would like to thank firstly to the Mayor of ?zmir Metropolitan Municipality, Mr. Tunç Soyer, all members of the sector and IZFA for their contributions to the sector.

Aydin Dinçer, Chairman of the Board of Istanbul Mineral Exporters’ Association said “As in last year, we, as all Exporters’ Associations, should support IZFAS in order to add strength to the fair in bringing purchasing committees by allocating as much budget as possible”.
Ali Emiro?lu, Chairman of the Board of Directors of the Turkish Miners Association said “We have one of the three largest fairs in the world. Marble Izmir is the most important fair of Turkey and our industry. Although the whole world was going through a difficult period in many issues, this difficult period also provided different advantages to our country and our industry and we realized an export of almost 2 billion dollars. I think this amount will continue to increase this year as well”.

Mevlüt Kaya, Chairman of the Board of Aegean Mineral Exporters’ Association said “We are one, we are a whole. Together with Actor representatives who attended the , all Exporters’ Associations and the members of the sector board, we will put our hearts into the fair and organize a very nice fair. We will support IZFAS by doing whatever we can.”

International Stone Congress President Prof. Dr. Faruk Çalapkulu said “Our Marble Fair started with Marble Love Road and has become one of the most important fairs in the world today. While there are many fairs in the world that could not take place due to the pandemic, IZFA  achieved great success with the support of Izmir Metropolitan Municipality. Now we will spend all our energy and support to have a successful fair”.