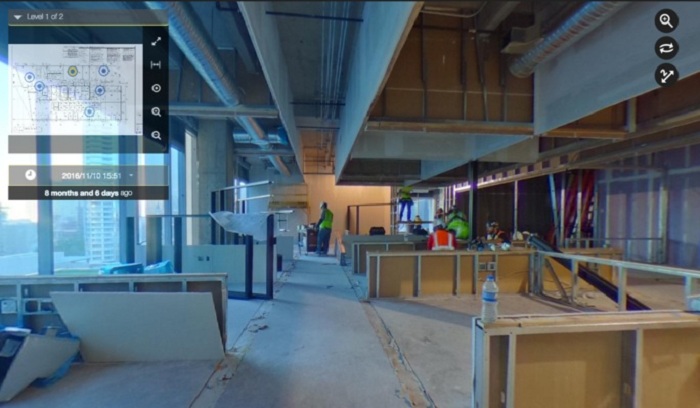 When faced with an inspection delay related to the COVID-19 pandemic on a project in Nashville, Tennessee, general contractor DPR turned to its existing technology tools to maintain the schedule and ensure on-time delivery to its customer, WeWork.

Just two weeks away from completing a 60,000-square-foot WeWork space in The Gulch, a LEED-certified community near downtown, the local fire marshal canceled all inspections indefinitely due to safety concerns around the novel coronavirus. This left DPR without the necessary lighting inspections to reach substantial completion, which would allow WeWork to take over the space.

The DPR team was using a 360-degree camera to shoot progress photos and footage for the owner, so they decided to do the same for the fire marshal. After a review of the sample video, which allowed the inspectors to get a 360-degree look at the space as well as rotate the view up and down, the fire marshal authorized a full virtual inspection, which DPR passed. This allowed DPR to turn the project over to WeWork on time. ?

Some inspectors around the country had been dabbling in video inspections before the COVID-19 outbreak disrupted construction projects, but others have been forced to up their technology games in order to continue providing services and adhere to social distancing guidelines, and the trend is catching on.

The video inspection process is a fairly straightforward one, with an inspector and onsite representative connected via Facetime, Skype or some other similar tool. The individual on the jobsite physically moves around the inspection area, giving the inspector the necessary views. As long as the in-person inspection would have been visually based, then a video inspection can be substituted.

However, organizations like the International Code Council realize that some building departments need guidance in making the shift and offered the following advice during a recent webinar.

First, obtain authorization from governing authorities.
Communicate clearly to contractors and customers about what the process entails and provide step-by-step instructions.
Make sure the system is secure.
Set out and abide by established record-keeping requirements.
Whenever possible, expand or modify existing software tools for use in the new video program.
Ensure that the building officials conducting remote inspections have ready access to current building codes and standards.

Still, there are some challenges in getting building officials to make the move to digital tools, like motivating older inspectors, who are used to operating within a paper system, to embrace a new way of doing things. Another is educating contractors about their roles in video inspections and getting them to follow the correct steps.

The benefits are hard to deny, however, which led the building officials who participated in the webinar to agree that it would be hard to return to their previous methods of conducting inspections. From not having to spend as much money on gas or fleet maintenance to being able to conduct inspections earlier in the day due to the elimination of travel time to the project, many building departments are discovering that technology has a significant role to play in the inspection process.?