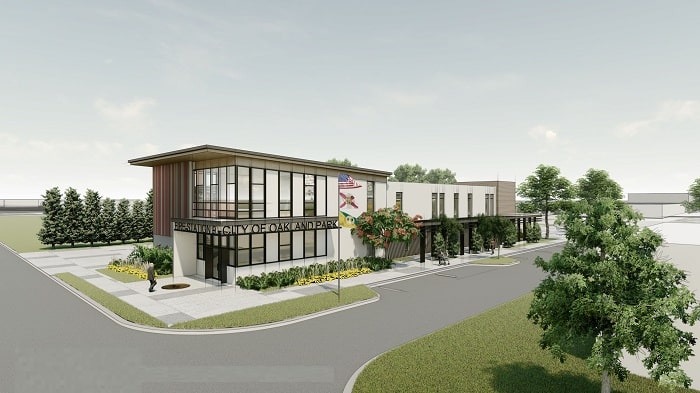 City Staff unveiled the designs for four new buildings in Oakland Park. Oakland Park City Commissioners approved next steps in the City’s Comprehensive Facilities Plan. The City’s new Public Works Facility, as well as Fire Stations 9 and 87, will advance to the pre-construction phase, and the design of the N. Andrews Gardens Community Center will move to Phase II. In addition, City Commissioners also approved first reading of the Ordinance to re-zone the Cubesmart property that will house the new Fire Station 20.

Funded by Oakland Park’s $40 million General Obligation Bond, which was approved by 67 percent of voters on November 6, 2018, the Comprehensive Facilities Plan is the cornerstone of the City’s 10-year redevelopment plan. Spearheaded by City Manager David Hebert, the redevelopment plan is targeted for completion in 2029 in tandem with the City’s centennial birthday.

“Our new buildings will be models of urban civic spaces that are sustainable, reliable, safe, and beautiful,” said City Manager David Hebert. “While we remain in challenging times, future construction of these buildings offer several opportunities including lower interest rates and costs for building materials, and the creation of more than 3,000 local jobs created by private development projects planned in Oakland Park.”

In total, the City’s Comprehensive Facilities Plan includes the construction of four new buildings: the Public Works Facility (the completed complex will also include an Emergency Operations Center and two-story parking garage), the N. Andrews Gardens Community Center, Fire Station 9, and Fire Station 20 that will be built by Cubesmart (saving the City $4 to $6 Million) but occupied by the City. The Plan also includes renovations to Park Place at Jaco Pastorius Park, Fire Station 87, and the City’s Municipal Building.

“I am thrilled to see a consistent look throughout these buildings so people can recognize them,” said Mayor Matthew Sparks. Vice Mayor Jane Bolin added, “It certainly is very exciting and speaks to a city on the move. It is incredible that we have been moving forward during this difficult time.”

“Our plans for continued redevelopment provide an amazing opportunity to build community while celebrating the diversity and multigenerational character of the City of Oakland Park,” said Casey Graham, P.E., Director of Engineering and Building Services.

To view the renderings for the new buildings and learn more about the City’s 10-year redevelopment plan visit https://bit.ly/OP2ndCentury