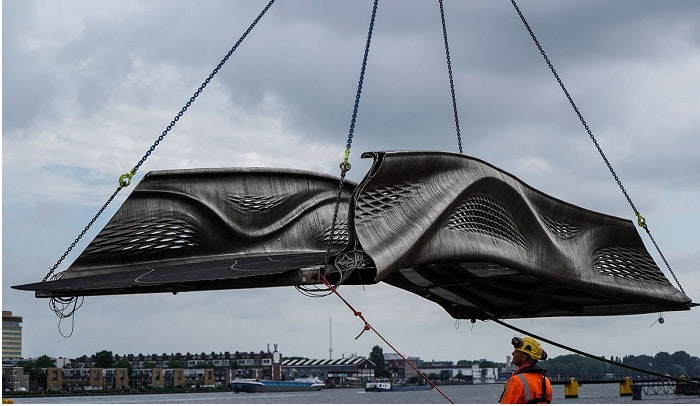 The first 3-D-printed steel bridge in the world—an innovative project headed by Dutch company MX3D—opened to the public in Amsterdam. Queen Máxima of the Netherlands presided over the unveiling, pressing a button that prompted a robot to cut a ribbon hanging across the bridge, reports Aleksandar Furtula for the Associated Press (AP). The novel landmark spans one of the city’s oldest canals and sits in the center of the red-light district.

In addition to marking a milestone in the capabilities of 3-D printing technology, the 40-foot-long bridge doubles as a “living laboratory” with hidden sensors that collect real-time data about the overpass’ performance. Researchers at Imperial College London will use this data to analyze how the bridge reacts over time as pedestrians interact with it.

“A 3-D-printed metal structure large and strong enough to handle pedestrian traffic has never been constructed before,” says Leroy Gardner, a structural engineer at Imperial, in a statement. “It’s fantastic to see it finally open to the public.”

Plans for construction of the smart bridge began in 2015, when MX3D proposed 3-D printing a metal bridge with state-of-the-art technology that combines robotics and welding, reports Sofia Lekka Angelopoulou for Designboom. Six tons of stainless steel and several years later, the bridge stands as an award-winning feat of engineering.

According to New Atlas’ Adam Williams, the actual printing process took six months and was completed in 2018. Due to renovations to the canal’s walls, the bridge could only be installed this month. It was constructed remotely with the help of four robots, then shipped to the site and lifted into place by crane.

“If you want to have a really highly decorated bridge or really aesthetic bridge, suddenly it becomes a good option to print it,” he says. “Because it’s not just about making things cheaper and more efficient for us, it’s about giving architects and designers a new tool—a new very cool tool—in which they can rethink the design of their architecture and their designs.”

To assess how the printed steel behaves over time, the team created a “digital twin” of the bridge that will use incoming data from the sensors to simulate the state of its physical counterpart. Information from this computerized model will help experts explore potential new uses for 3-D-printed steel and “teach” the bridge how to perform tasks like counting the number of pedestrians that cross it, per New Atlas.

As Mark Girolami, a civil engineer at the University of Cambridge who is working on the digital model, tells New Scientist’s Matthew Sparkes, bridge failures can often be attributed to overlooked deterioration. By constantly transmitting data about a bridge’s status, 3-D-printed versions may be able to provide early warnings and prevent collapses.

The bridge, whose embossed silver waves lend it a modern, futuristic look, stands out amid its surroundings: Amsterdam’s oldest neighborhood and a place known for being the underbelly of the Dutch city.