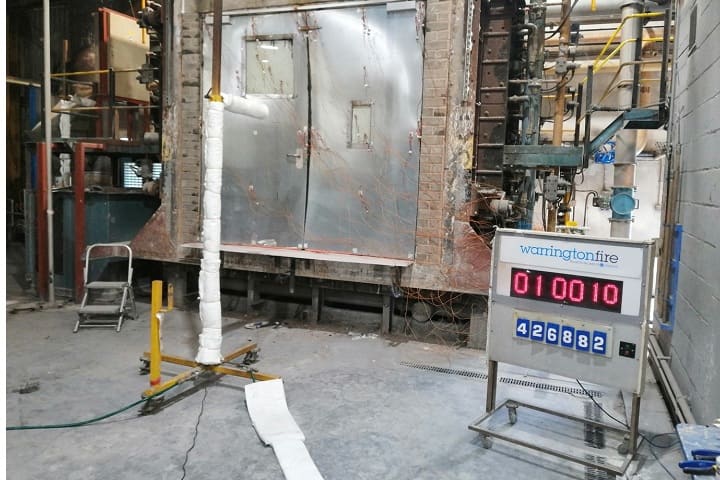 A series of successful fire insulation tests concluded this week suggest that an ‘industry changing’ fire safety breakthrough is on the horizon for the UK’s construction and infrastructure sectors.

Rhino Doors, the UK’s leading designer and manufacturer of bespoke and CPNI-rated engineered doors, has this week completed the first stage of putting its new range of El2 rated insulated fire doors through a series of indicative and full-scale fire tests.

The tests, carried out at Warringtonfire on Rhino’s El260 fire door, exceeded expectations achieving significant overruns on both integrity and insulation exposure time targets, with the insulation overrun in particular indicating that the much more demanding performance required for an El2120 rated product will be met during future development tests later this year.

Rhino’s new El2 range will make insulated fire doors far more widely available and affordable – meaning everything from high-rise projects to stadia and rail stations will be able to fit fire doors with higher insulation performance than any other currently on the market – radically improving fire safety across the UK and beyond.

Commenting on the successful test of the doors, Stuart Lawrence, Managing Director of Rhino Doors, said:

“When Rhino Doors’ special projects section identified that many current infrastructure projects do not specify insulated steel fire doors due to existing doors being overly expensive, aesthetically unpleasing or not offering the right level of protection, we wanted to change this situation.” 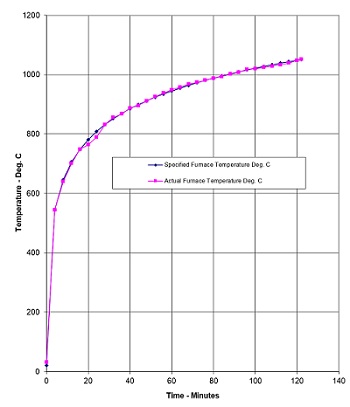 (Illustrated above is the test protocol for the EN1634-1 standard which requires the furnace to increase in temperature at a prescribed rate, following the blue curve above. The test is particularly onerous with the door having to withstand +500oC within just 4 minutes and over 900oC by 45 minutes).

“The special project team’s solution has exceeded expectations. During the test Rhino’s El260 door continued to provide the required insulation protection as well as the standard integrity performance for an hour against temperatures reaching 945oC. This is the sort of temperature typically associated with ‘cellulistic’ fires where wood and other combustibles are the fuel; in other words, similar temperatures to building fires.”

“We’re very pleased with the results of this test which indicates we are not far from developing an insulated fire door with a two-hour rating which will have a hugely positive impact upon fire safety in the construction and infrastructure sectors.”

As well as creating steel fire doors with the highest insulation performance on the market, Rhino Doors is also working on versions of the doors that will protect against other threats as detailed by Rhino’s Chief Engineer, Dr. Chris Norris:

“In addition to the achievement of the highest possible El fire ratings, our ultimate objective is to produce two new products that also provide the acoustic attenuation, physical attack and static pressure resistance increasingly demanded by specifiers and architects for major construction projects such as rail stations, stadia, and high-rise accommodation.”