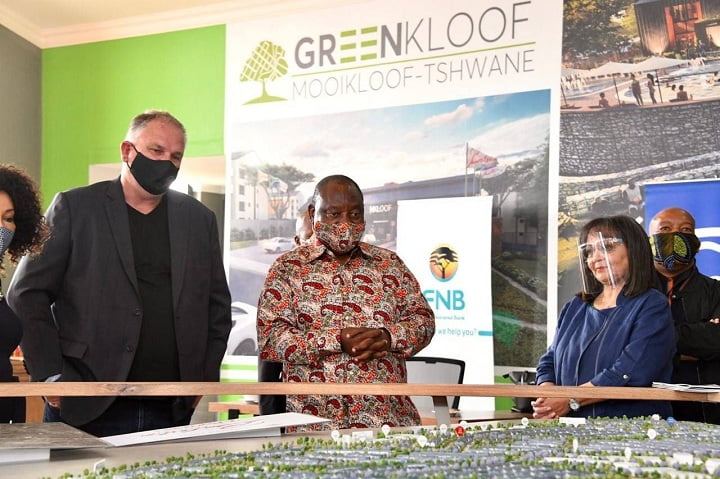 Work has begun on the $5bn, “Mooikloof Mega City” residential project in Pretoria. The scheme, called the largest of its kind in South African history, will involve building of 50,000 apartments over 10 years.

Mooikloof was officially launched on Sunday, at a ceremony attended by President Cyril Ramaphosa.

Speaking at the launch, he said: “Once completed, the Mooikloof Mega City may end up becoming the world’s largest sectional property development, with land also earmarked for schools, shops and offices.”

He added: “It is pleasing to note the development is being pursued in line with green building principles, and will make optimal use of green belts and green spaces for residential recreation.”

The scheme is being developed as a public–private partnership between Balwin Properties, the Gauteng provincial government, and the City of Tshwane.

Steve Brookes, the chief executive of Balwin Properties, told the Moneyweb newsite that the project, which is located in the east of the city, would cater to government employees, and also for ”previously disadvantaged people who can live closer to town”. It will be based around a nature reserve, and would include a fire station, a police station and a hospital.

The first phase of the development will consist of 16,000 apartments. Balwin will build the housing and provide the land, and the government will provide supporting infrastructure.

According to Brookes, Balwin is hoping to develop two more “mega cities” in South Africa with the aim offering affordable housing closer to residents’ places of work.

He said: “I believe in redressing the horrible legacy of apartheid. You know, the 40-40-40 principle, which President Ramaphosa spoke about, is so true. You know, 40% of the people can’t afford housing, 40% spend 40 minutes travelling to work, and then 40% of their income is spent on travelling.”