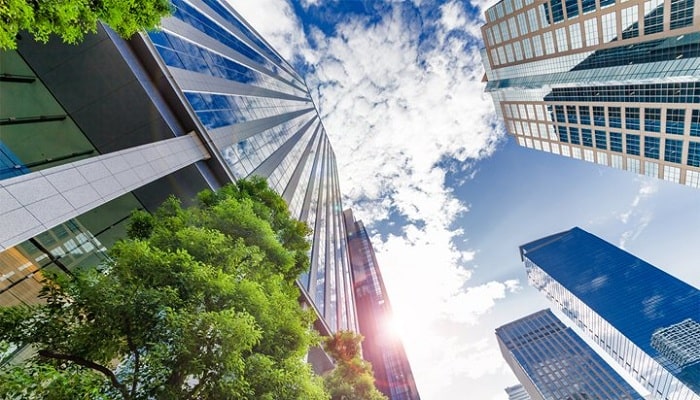 Climate Pledge Arena, the future home of NHL expansion franchise the Seattle Kraken and WNBA team Seattle Storm, will be the first certified net-zero carbon arena in the world when it opens in October 2021. Mortenson is the general contractor on the project, which was designed by architecture firm Populous.

In order to earn the Zero Carbon Certification from the International Living Future Institute, the arena will run solely on electrical power from on-site solar panels and off-site renewable energy, such as wind farms.

The $1 billion arena retains the roof and exterior glass facade from the Seattle Center Arena — built in 1962 — and sits within the same 74-acre Seattle Center development as the Space Needle.

Plans to make the arena net-zero carbon came after construction began, Logan Gerken, vice president and general manager at Mortenson, told Construction Dive. This meant redesigning parts of the facility midstream to meet the project’s environmental goals, which Gerken said was done by using digital tools — mainly BIM and 4D modeling, in addition to VR allowing a virtual walkthrough of the spaces — to collaborate with project partners on changes, such as switching the plans for natural gas cooking equipment to electrical.

“While arenas get used almost every day, their demand is very uneven and [has] to be flexible enough to put on an 18,000-seat capacity NHL game or concert and quickly scale down to efficiently support a 500-person community or corporate event,” he said.

Despite the challenge of changing the arena to be net zero, the most difficult part of the arena construction, Gerken said, was the requirement to keep the landmark roof and exterior wall constructed for the 1962 World’s Fair.

“We are doubling the size of an arena without changing its roof or walls. We’ve likened this project to building a ship in a bottle,” he said.

Construction on the arena began in December 2019, and is expected to be finished in summer of 2021. The finished arena will be 800,000 square feet, twice that of the former arena, and have space for 17,100 fans for hockey games and 18,100 for basketball, including private suites.