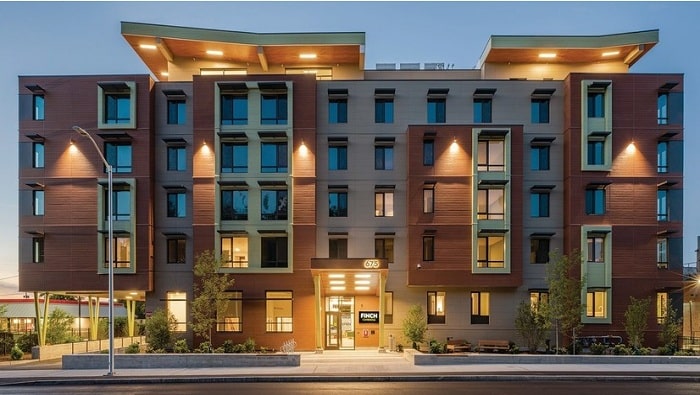 NEI General Contracting, an award-winning general contractor and construction management firm, announced it is working with ICON Architecture on the Finch Cambridge project on behalf of Homeowner’s Rehab, Inc. (HRI). Located at 671 Concord Avenue, this is the largest new multi-family affordable housing development in Cambridge, Massachusetts in 40 years. When complete in the Spring of 2020 the 124,000 SF development will provide 98 rental units of 1-, 2-, and 3-bedroom apartments that are permanently affordable to low-income households as well as moderate- and middle-income households. It is one of the first large-scale multi-family developments seeking Passive House certification in Massachusetts. The project is expected to be substantially complete in April 2020 and residents will be move in the following month.

“We have worked with NEI and ICON on several of our new construction projects and we knew they were the right team for Finch Cambridge. Both firms provide much-needed knowledge of Passive House and cutting-edge energy efficiency standards, and are collaborating with experienced sustainability consultants to build incredibly efficient and healthy housing for the long-term,” said Jane Carbone, Director of Development at HRI. “We received funding from a grant offered by the Massachusetts Clean Energy Center and it allowed us to truly commit to Passive House design for this project.”

Together, the project team worked through the details to ensure compliance with Passive House standards and to prepare for the rigorous inspections scheduled throughout the design and construction process. Passive House design presents unique challenges during construction.

“NEI worked diligently to understand the intent of the Passive House elements and worked closely with the architect to maintain constructability while meeting the intent,” said Josef Rettman, president of NEI Construction.

NEI had to install an air barrier on interior partitions that wouldn’t normally apply on a traditional construction project in order to provide a tight building envelope at the Passive House boundaries identified by ICON Architecture. In addition, the sequence of subcontractors had to be adjusted, often bringing in a trade earlier than normal to meet certain Passive House requirements and inspection milestones. For example, the exterior air barrier was installed while the building was being erected, sometimes between two prefabricated wood wall panels, as required to maintain continuity at the Passive House boundaries which were located at a few interior partitions.

Finch Cambridge is located in the Alewife/Cambridge Highlands neighborhood directly across from the Fresh Pond Reservation, which hosts walking paths, parks, and playgrounds, and in walking distance of grocery stores, restaurants, shopping, and fitness options. Apartment amenities will include open floor plans, large windows, and Energy Star™ appliances. Residents will have access to a large multipurpose community room and kitchen, resident lounge and study rooms, a rooftop terrace and landscaped outdoor spaces. It is located near two MBTA bus lines and a red line subway station.

This property is being developed and will be owned by HRI, a local non-profit affordable housing developer in Cambridge. Finch Cambridge will be professionally managed by Winn Residential.