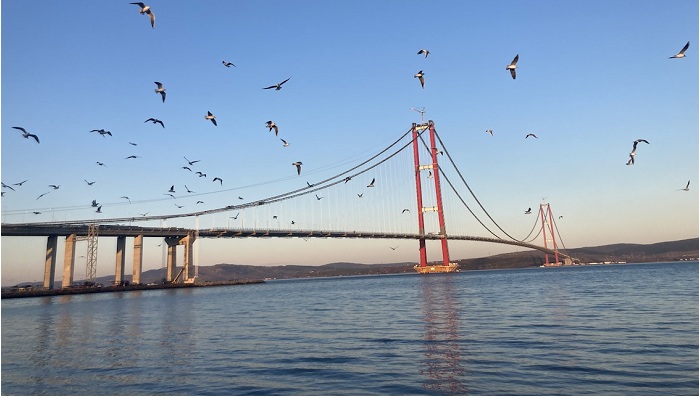 Turkish president Recep Tayyip Erdogan opened the 1915 Çanakkale Bridge over the Dardanelles Strait. It has a central span of 2,023m, which means it usurps the title of world’s longest suspension bridge from the Akashi Kaikyo crossing in Kobe, Japan.

According to Erdogan, the Çanakkale cost €2.5bn to construct, but will generate €5.3bn in economic output, create 118,000 jobs and generate €2.4bn in revenue.

The bridge, which is named after an Ottoman naval victory during the First World War, is the first over the Dardanelles, and the sixth crossing between European and Asian Turkey, alongside three other bridges and two tunnels.

It is located 10km south of the Sea of Marmara, and its six lanes will be part of a 321km, $2.8bn project to connect motorways in Thrace and Anatolia.

The bridge is notable for the international engineering team that worked on it. The main design work was carried out by Cowi of Denmark and Pyunghwa Engineering Consultants of Korea, and this was verified by Arup of the UK and Aas-Jakobsen of Norway, with input from Turkey’s Tekfen and T-Ingénierie of Switzerland.

The construction itself was carried out under a public–private partnership model by a group of Turkish and South Korean companies, led by Daelim, SK, Limak and Yapi Merkezi and including China’s Sichuan Road and Bridge Construction Group.