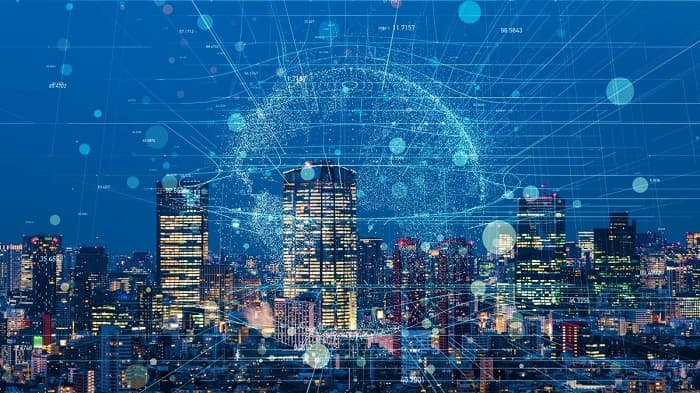 With the ongoing automation of traditional manufacturing and industrial practices, the world is heading for a fourth industrial revolution – or industry 4.0 – with machines monitoring and diagnosing issues in infrastructure, without the need for human intervention.

Considering the global population is set to grow from its current 7.7 billion to 11 billion by the end of the century, this rapid development of technology could help to mitigate some of the construction and infrastructure demands that a larger population brings, such as the need for new housing, while also improving the performance of current infrastructure by increasing efficiency and durability.

But how is the construction industry contributing to this revolution, and what benefits is this bringing?

Often, Smart Infrastructure is discussed alongside the Internet of Things (IoT) – a term used to summarise devices that are connected via the internet and communicate with one another, such as smartphones or sensors. This is because IoT devices are used within infrastructure as solutions to improve structure quality or effectiveness.

If we look at construction, the technology behind IoT has actually existed in the sector for many years – from software giving remote access and office-to-field data sharing right through to cloud computing data and storage, yet it is still not always adopted on site.
The Topcon GTL-1000: a fully functional Robotic Total Station with a high-speed, high-quality laser

When used on site, construction technology such as Robotic Total Stations can be used to collect a wealth of helpful data. For example, the Topcon GTL-1000, which recently won ‘Construction Product Innovation’ at the Irish Construction Excellence Awards 2020, combines a fully functional Robotic Total Station with a high-speed, high-quality laser to allow operators to produce a complete, 360-degree, locally registered point cloud of an area in a matter of hours.

Once collected, this point cloud data can be used to form a Digital Twin model of a structure. Providing workers with real data instead of assumed information, Digital Twin’s enable activities like monitoring, diagnosis and repair of a structure to be completed accurately and remotely – saving time and money on travel expenses and also by raising awareness of structural health issues before they become critical.

In effect, connected digital construction technology can be used to inform Digital Twins so that during verification of the construction of structures, like buildings and bridges, project managers can ensure that there have been no deviations outside of the tolerances required for the project. Plus, they will also have a record of this going forward, in order to function correctly.

The benefit of being able to monitor existing infrastructure cannot be underestimated. Since a significant amount of Europe’s critical infrastructure was built post-war, many structures have reached, or are approaching, the end of their originally intended design life. However, since these structures often form integral parts of Europe’s network of infrastructure, it is up to the construction industry to find solutions to this fundamental challenge.

This is where intelligent monitoring, through the use of Robotic Total Stations, can really help to solve Europe’s infrastructure crisis. Projects such as the extension to the Paris underground metro, for example, demonstrate how smart monitoring can guarantee the security of a project – in this case, Robotic Total Stations have been used to check for any changes in measurement which could indicate structural movement. If found, these changes will then be reported to engineers, who can address them immediately and make sure that construction is not impacted.

The future of construction and Smart Infrastructure

Looking to the future, existing connected construction technology has a vital role to play in Smart Infrastructure. Whether it be through monitoring and verification, or data collection and sharing, advancements in construction technology are able to help us oversee the health of existing infrastructure. Since these structures often act as the foundation of Europe’s infrastructure, and since the land available for building new infrastructure is decreasing, this can also offer a solution to the challenges of an increasing population as it helps to preserve and maintain the vital buildings, bridges and roads we already have.

Moving forward, the challenge, then, will not be developing new technologies, but making sure our existing technologies are adopted and used on projects to the best of their ability, in order to support, maintain and build upon Europe’s infrastructure.