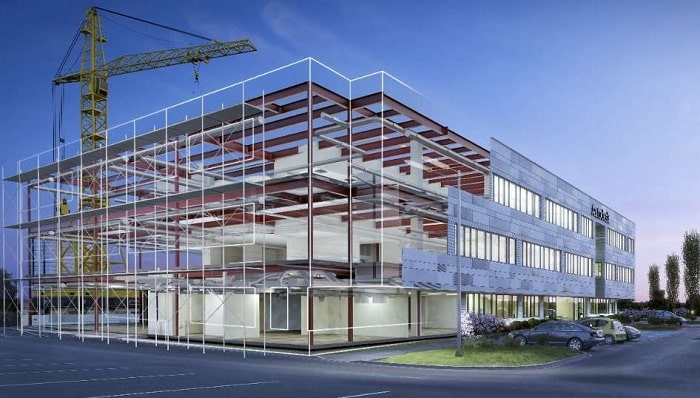 3D BIM modelling and a digital twin are supporting the delivery of 6-8 Parramatta Square, part of one of the biggest sustainable urban revitalisation projects in Australia

Located directly adjacent to a major railway station with limited road access, as well as situated in a flood zone close to the Parramatta River, the project required careful infrastructure planning and design to ensure that building and public domain were seamlessly integrated.

From the conceptual design stage, JPW relied on OpenBuildings Designer to model the basement, podium and core according to traditional BIM principles. With much of the conceptual design already completed, the team realised the necessity and benefit of integrating computational design for the geometrically driven design aspects – including the façade, tower structure and ceilings – to advance BIM and workflow efficiencies.

When developing the tower structure design, the interoperability of GenerativeComponents with Excel allowed interaction with the tabular structural engineering data for the floors, beams and columns. The team could then use the conditional formatting features in Excel to load, check and generate computational design models for the tower structure. Bentley’s computational design model could be driven by Excel to customise an accelerated and automated workflow for generative and coordination purposes.

All the Excel data for the column height and beams was pulled and imported into OpenBuildings Designer to generate visual 3D models. For the floor slabs, JPW developed a recursive script in OpenBuildings Designer to individually model them, level by level, correctly identifying the placement of services as solids and colour-coding them according to their respective discipline. The result was an automated output of a structural model for each floor comprised of the columns, beams and slabs with all the correct service penetrations.

“The façade was another ideal area to incorporate the GenerativeComponents feature in OpenBuildings Designer,” said Yap.

To determine the best balance between new architecture, the surrounding heritage and environment, JPW required iterative flexibility. The team generated multiple variations of the unique panels and fins, accommodating the changing panel radius and varying fin depths. The team used OpenBuildings Designer to generate a unique script that established a polygonal grid as an envelope. The grid encompassed the building where each polygon was parametrically modelled to simplify modification, as well as represented a panel type in the façade system. By creating an Excel spreadsheet that tied back to the OpenBuildings Designer script, JPW iterated over 8,000 panels across the façade. The team took each of the panels and applied them to the polygon envelope based on colour, automating and accelerating the generation of a complete façade model.

This seamless compatibility made it realistic for JPW to model the ceilings to LOD 300, including the lighting fixtures and fittings.

“Typically, modelling the ceilings to this level of detail on a project of this scale would be nearly impossible and certainly unusual. GenerativeComponents [in OpenBuildings Designer] made it realistic for us to fulfil this documentation requirement,” said Yap.

The team used existing data for the façade boundary, columns and core, subtracting them from the ceiling region to generate a script for the ceilings. Team members then sliced the ceiling model into tiles that corresponded to an Excel spreadsheet containing the lighting data. JPW used the colour-coding method to reference the ceiling lighting layout for the multiple floors. A similar process was used to layout the HVAC diffusers, provided by the mechanical engineer through an IFC model.

Checking and updating the tower columns previously took one person one week; with OpenBuildings Designer, it was completed in one hour. JPW modelled all the façade panels in less than one hour, compared with two weeks using traditional methods; and one person updated and integrated changes to the façade model in one day, compared with two people taking an entire week.

Modelling the objects familiarised JPW with the spatial implications that are important to architectural design. By integrating colour-coding for visual differentiation and scripting failure mechanisms into the data flow, JPW automated design verification, replacing manual methods of error-checking and eliminating the risk of human error. Over the entire project period, JPW achieved significant time and cost savings, as well as optimised design outcomes to meet all planning and sustainability goals. The building will be efficient in terms of energy, waste, materials, indoor environment and water. The building will have usable and inviting civic spaces, showcasing the next generation of green buildings of this size and scale.

JPW used OpenBuildings Designer to establish a connected data environment to facilitate integrated design by implementing a digital twin. Creating a digital twin was fundamental to understanding the project’s design and development. JPW relied heavily on digital data provided from all services and structural engineering consultants. Therefore, it needed to ensure that these models and their documentation methodology were aligned with the architecture. Using the digital twin as an architectural control model to reference multidiscipline data, JPW tested design alternatives to determine the architectural impact that enabled the resolution of complex spatial parameters and clashes. Working with the integrated 3D model allowed the architects to identify and timely resolve inconsistencies, mitigating any negative financial and architectural impact, and avoiding rework.

The digital twin helped JPW seamlessly and timely exchange data and models in formats accessible to all project participants. Bentley’s 3D digital application facilitated the generation of 2D drawings and documentation directly from the model, streamlining both office workflows and coordination processes between architects, contractors and consultants. Using the digital twin from conceptual design through construction defined the collaborative methodology, helping arrive at a design solution that celebrates the architectural vision while meeting client requirements and the project’s ecologically sustainable goals.

“Without the digital twin, the project would not be able to be delivered,” said Victor Au, architect with JPW.
Shifting perspective on architectural design

Architects often spend a disproportionate amount of time trying to represent solutions rather than actually designing them. Computational design allowed JPW to focus on resolving problems and finding better design solutions to deliver 6 & 8 Parramatta Square. While scripting in OpenBuildings Designer was a time investment, within only eight months JPW realised the rewards, saving countless hours and significant costs. In the past, it would have been inconceivable to design from an Excel spreadsheet. However, the success of this project has shifted the perspective on design, encouraging JPW to adapt this solution on future projects, reaping the benefits and optimising delivery.

“Computational design empowers us to rethink our approach and, ultimately, the way that we design our architecture, shifting the way our studio thinks about our practice in the future,” said Yap.